OTC student takes to the skies as a flight paramedic 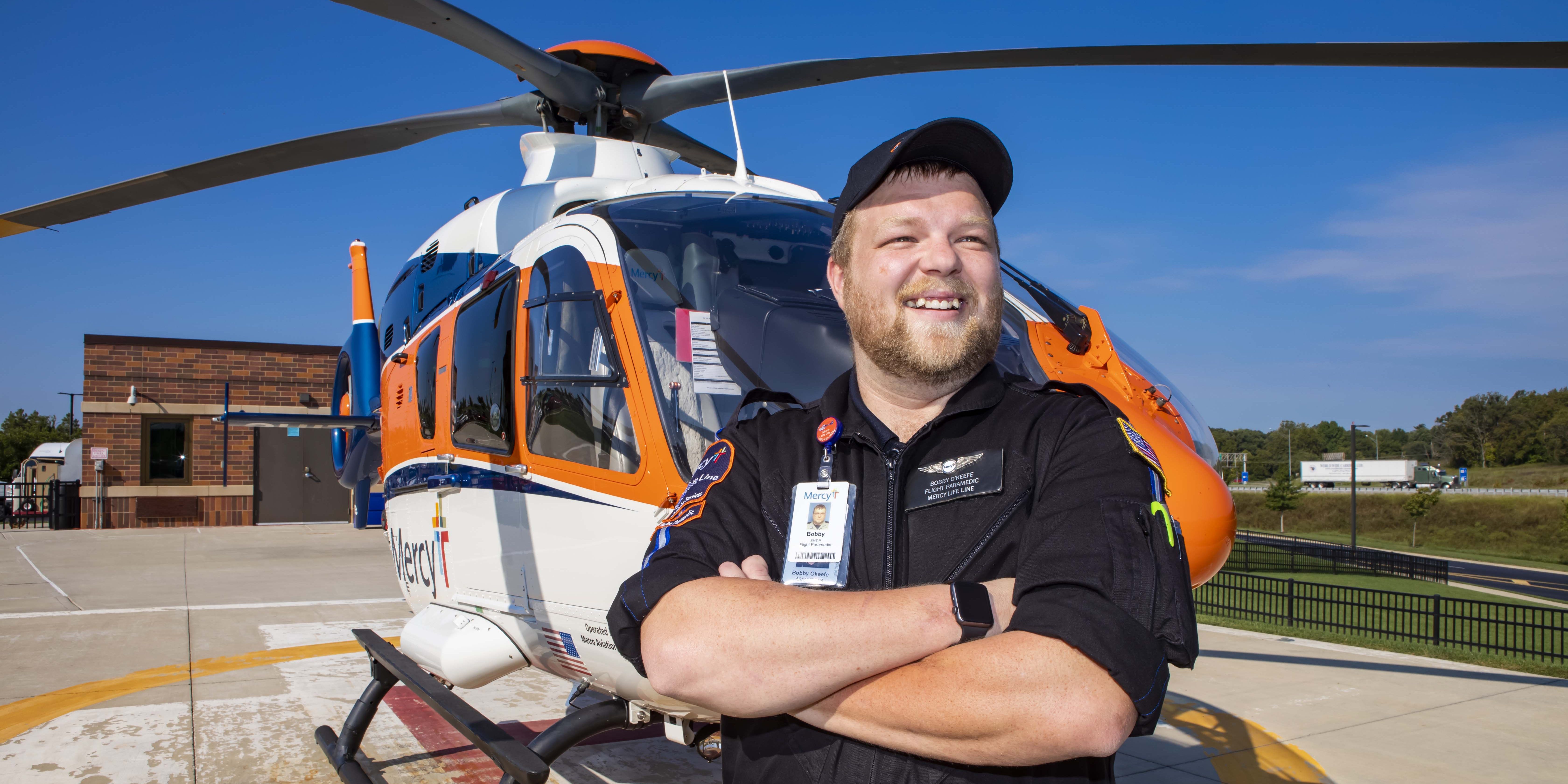 When you ask most college students why they decided to pursue a degree, they will often tell you it’s because their families encouraged or inspired them to do so. OTC student Bobby O’Keefe says he too was inspired by his family to attend college, but not for the reasons you might think.

At just 8 months old, Bobby contracted a rare bacterial infection called meningococcemia. The life-threatening condition caused major tissue damage, which ultimately led to the loss of his fingers and toes. As a result, Bobby says his parents often encouraged him to live off disability once he graduated from high school. Fortunately for Bobby, their urging had a reverse-psychology effect.

Today, Bobby is a flight paramedic with Mercy Life Line in Joplin. The Stockton High School graduate got his start in the Emergency Medical Services field more than a decade ago, when he earned his Emergency Medical Technician certificate from OTC. Bobby spent the last 10 years advancing in the field, and he’s now back at OTC with plans to transfer to Southwest Baptist University’s paramedic to registered nurse bridge program. His next goal is to become a flight nurse.

Bobby, who was the first of his family to go to college, says he enjoys furthering his skills both on the job and in the classroom. As a flight paramedic, he learns something new every 24-hour shift.

“In the emergency medical field, you don’t have the same type of patient over and over again,” he said. “For example, every heart attack case presents itself differently. So, you know your stuff, but you’re constantly learning on the job.”

Bobby added that he had never been an “A student” until he found his niche in Emergency Medical Services.

Bobby earned his EMT certificate from OTC in 2007. He spent two years working as an EMT, before applying to Mercy’s paramedic school in 2009. Bobby knew the hands-on experience would give him a competitive edge in the program. He also used that time to hone the skills he knew he would need on the job.

“Obviously my hands are different,” he said. “So before I applied for Mercy’s program, I practiced inserting IVs on oranges and intubating manikins, just to make sure I could do it all.”

And do it all he did. In fact, Bobby says his lack of fingers often gives him an advantage in the field – especially when it comes to intubating patients.

“There are some benefits to not having fingers,” he said with a grin. “When most paramedics simulate intubations, they stick their pinkie out to simulate the blade of the laryngoscope. But since I really don’t have much of a pinkie, I can slide my scope lower and put the blade where my pinkie should be. That gives me a better grip on the scope, and makes intubations easier for me.”

Bobby said that once he got a taste of paramedicine, he knew he wanted to take his skills to new heights. After earning his critical care certification, he began to apply for jobs as a flight paramedic. He got the call from Mercy Life Line on April 19, 2016.

“It was my dream come true,” he said. “I’d always wanted to fly for Mercy. They have a top-notch program and dual-engine, IFR-rated aircraft. Plus they’ve been accident-free for 34 years.”

Since then, Bobby has earned his Flight Paramedic Certification (a newer requirement for flight paramedics). He now works two 24-hour shifts a week at Mercy Life Line in Joplin, and goes to school at the OTC Springfield Campus on his days off. In addition to this, Bobby also works for Citizens Memorial Healthcare in Cedar County and serves on the volunteer fire department in Stockton. He says the flexibility of his jobs and school allow him to spend plenty of time at home with his wife, Lyndzie, and their 5-year-old daughter, Kyndal.

“People have too many excuses for why they don’t pursue something,” he said. “But once you see how much better your life can be when you’re busy and working toward something great, that’s where you’ll find happiness.”

OTC EMT-Basic: The OTC EMT-Basic course is a seven-credit-hour course typically completed in 16 weeks. Upon completion, students will qualify for the National Registry practical and written examinations. Successfully passing the exams will qualify the applicant to apply for licensure in the state of Missouri by the Bureau of Emergency Medical Services and by the National Registry of EMTs.

OTC Paramedic: Through OTC’s Paramedic program, students can pursue either a certificate or a degree. The program consists of classroom lectures as well as clinical and field internships. Students who complete the degree program will receive an Associate of Applied Science from OTC and qualify for the paramedic certification exam through the National Registry of EMTs. Graduates will also qualify for licensing through the Missouri Department of the Bureau of Emergency Medical Services.