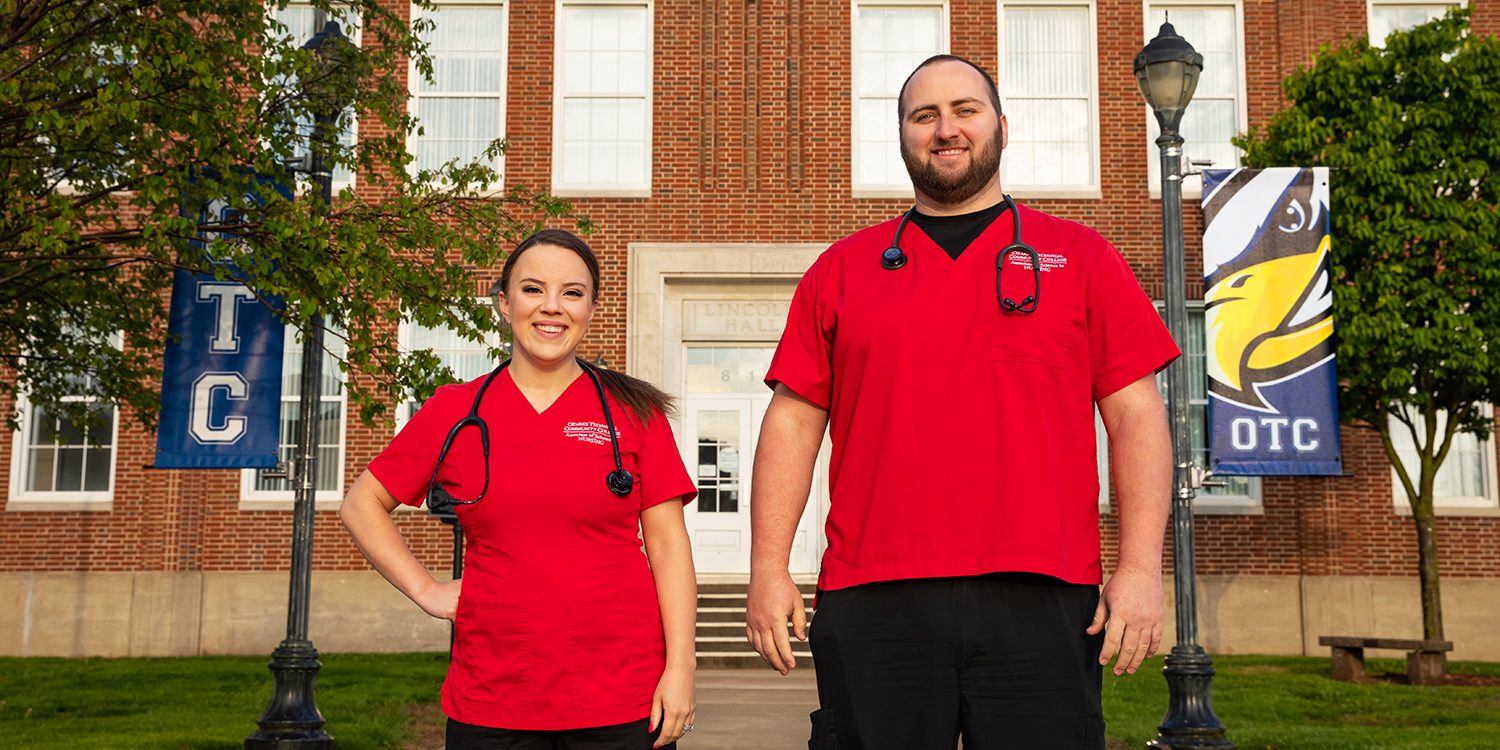 After pursuing their degrees in unconventional ways, Brent and Maddi Rainey are about to graduate in unconventional times. The couple, married with two small children, is putting themselves through nursing school in the middle of a global pandemic.

Their determination and grit is about to pay off in a big way, too. Brent and Maddi will earn their Associate of Science in Nursing degrees in May. And, like most OTC nursing students, they’ve already secured jobs in the field.

“We’ve done everything kind of backwards,” Maddi said with a grin. “And it’s been hard, but we’ve made it this far thanks to everyone who has believed in us.”

While many people go to college or establish a career before getting married and starting a family, these Branson High School sweethearts tied the knot shortly after graduation and started a family soon after. Brent’s father, who worked as a healthcare administrator, helped him land a job in a skilled nursing facility. That role eventually led to a nurse’s aide position at CoxHealth in Branson.

“Working in the hospital got me thinking about my own future and what I wanted to do,” Brent said. “We had students coming in for clinicals all the time, and you got a sense of which students were more prepared than others – OTC’s were always at the top.”

The professionalism and eagerness of OTC students, coupled with the nursing program’s 100 percent pass rate, factored into Brent’s decision to apply. Maddi, who was working in Branson’s tourism industry at the time, jumped at the chance to support her husband by signing up for the nursing program, too.

“I originally joined the program to help Brent get through school, but then I found my niche,” Maddi explained. “As a nurse, I get to be my patients’ source of grace and happiness. I get to make this a time of peace for them, and I’m so honored by that.”

The Raineys earned their Licensed Practical Nursing degrees from OTC in 2017. After that, they worked for a couple years in the field before continuing their education in the college’s ASN program. Last fall, Brent and Maddi accepted full-time positions at CoxHealth in Springfield. Upon graduation, Brent will care for patients in the ER, and Maddi will work in the neonatal intensive care unit. The couple plans to eventually earn their bachelor’s degrees, but they want to take a few years to enjoy their family and the new experiences their jobs will provide.

Brent and Maddi both agree they wouldn’t change a thing about their unconventional journey through higher education. A major point of pride for the couple is the fact that they will graduate with zero debt. They’re now preparing to join the full-time ranks of “healthcare heroes” and battle the Coronavirus head on.

“People call me the gentle giant,” Brent said. “I’m a big guy coming into your room, and some people say they’re surprised I’m a nurse. But I was born for this profession. I love being there for my patients, both physically and emotionally.”

No matter the challenges they’re about to face, Brent and Maddi say they definitely made the right career choice. Their skills are needed now more than ever.