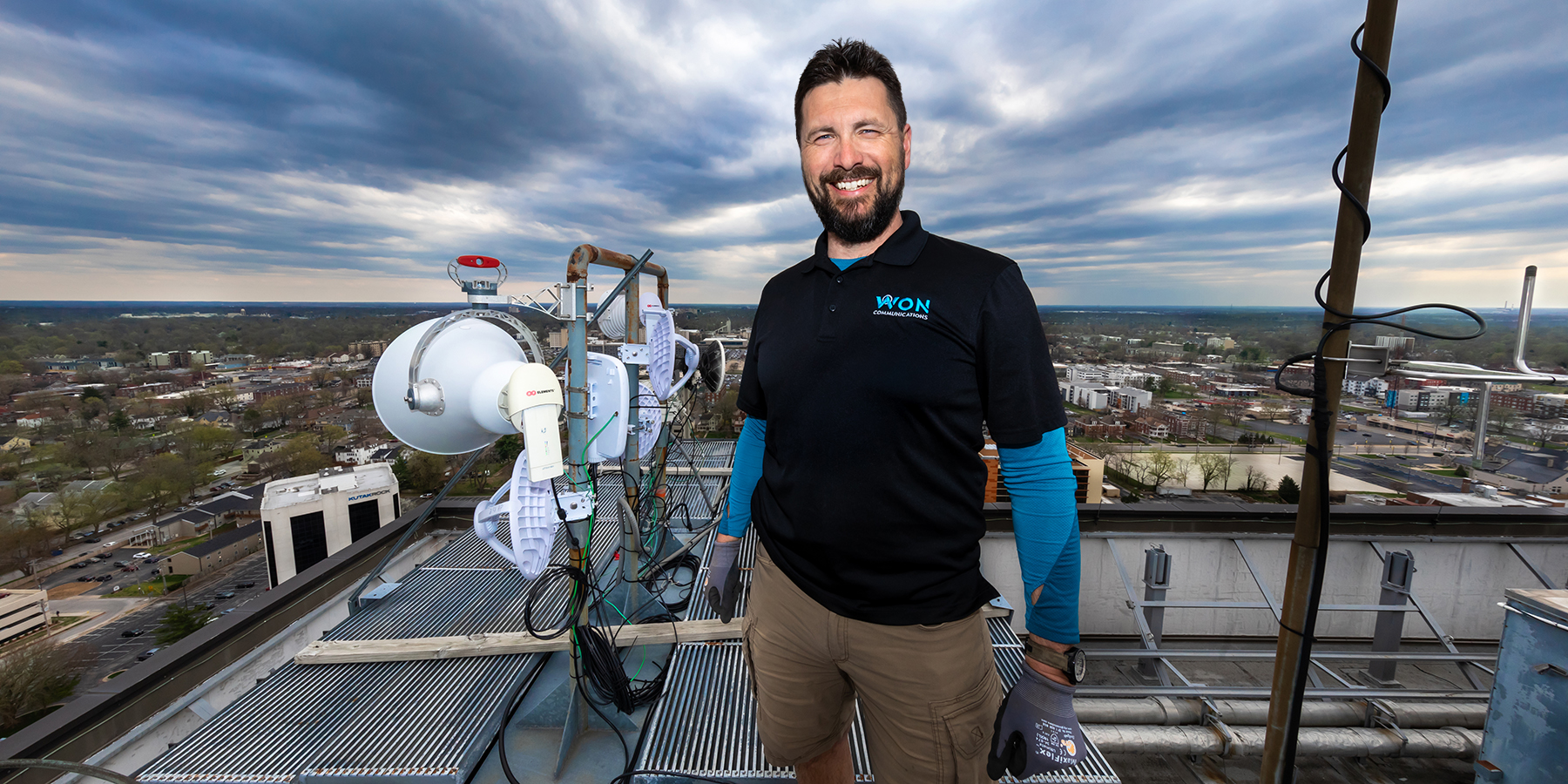 Matthew Thomas spent his childhood on the move, constantly uprooting and resettling in new places. His parents struggled to hold down jobs and pay the bills, adding to the instability in his life. But Matthew, from an early age, questioned the status quo. He knew he had to break the cycle and build a better life for himself.

Today, Matthew is an entrepreneur and business owner of WON Communications, LCC. The company, which began as a startup in the eFactory business incubator, offers residential and business internet services as well as phone and information technology support.

“We’re focused on business services,” Matthew explained. “One single point of contact, one phone number, one invoice – hence, the ‘WON’ of WON Communications.”

From an early age, Matthew was drawn to mechanics and electronics. He often questioned how and why things worked the way they did. While a student at Parkview High School, Matthew dual enrolled at Ozarks Technical Community College. He credits his time at OTC – particularly the one-on-one support he received from his instructors – for shaping the trajectory of his career.

“I will always remember one instructor – everyone called him ‘Mr. G’,” Matthew said. “His networking class really fueled my interest in technology and electronics.”

One day in class, Matthew was called up to the front of the room, and Mr. G gave him a scholarship. Matthew says that moment helped solidify his path – he was going to earn a college degree.

After dual-enrolling at OTC, Matthew transferred to Missouri State University where he double majored in electronics technology and industrial management. He was on his own when it came to familial or financial support, so he worked the night shift at Northrop Grumman Corporation to pay for school and living expenses. As an inner layer manufacturing supervisor, Matthew was responsible for the day-to-day operations at the plant, including personnel and manufacturing schedules, quality control, systems improvement and production quotas. He juggled his work and school responsibilities for six years while making progress toward his degrees at Missouri State.

“It was a bit slow at first. I was doing school part-time, and in the summer – that sort of thing,” Matt explained. “But, when I finally got used to working overnight, I went ahead and ramped up my hours so I was doing school and work full-time.”

After graduation, Matthew relocated to Solon, Ohio where he accepted a position in manufacturing management with Nestlé USA to supervise its logistics department. He later moved to Jonesboro, Arkansas to launch a new Nestlé facility there.

But again, Matthew questioned his present circumstances. He had earned his degrees and landed well-paying jobs, but he knew he had more to offer. That’s when Matthew decided to shift his focus to entrepreneurial ventures.

“I had that, ‘I don’t know if I want to do this for the rest of my life’ moment,” Matthew explained. “Nestle wanted its managers to operate their departments like they would an independent business – and I realized I wanted that for myself.”

Matthew seized his first business opportunity in the early 2000s, when Wireless Fidelity (or WiFi) became more commonplace. Unafraid of a challenge, Matthew taught himself the technology and began creating hotspots for businesses and apartment complexes. By 2005, he established his own company that designed, deployed and managed custom wireless networks for businesses.

In 2015, Matthew and his business partner, Cameron Rose, co-founded WON Communications, LLC. The company, which offers residential and business internet services, is renowned for its local, business-oriented focus. Matthew and Cameron employ about 10 people, with a network that covers Sparta, Springfield, Bolivar and Humansville.

As a result of his entrepreneurial success, Matthew was named OTC’s Distinguished Alumnus for 2021. Matthew will accept his award at OTC’s commencement ceremonies in May, and he plans to speak to the graduates about his motivation and drive.