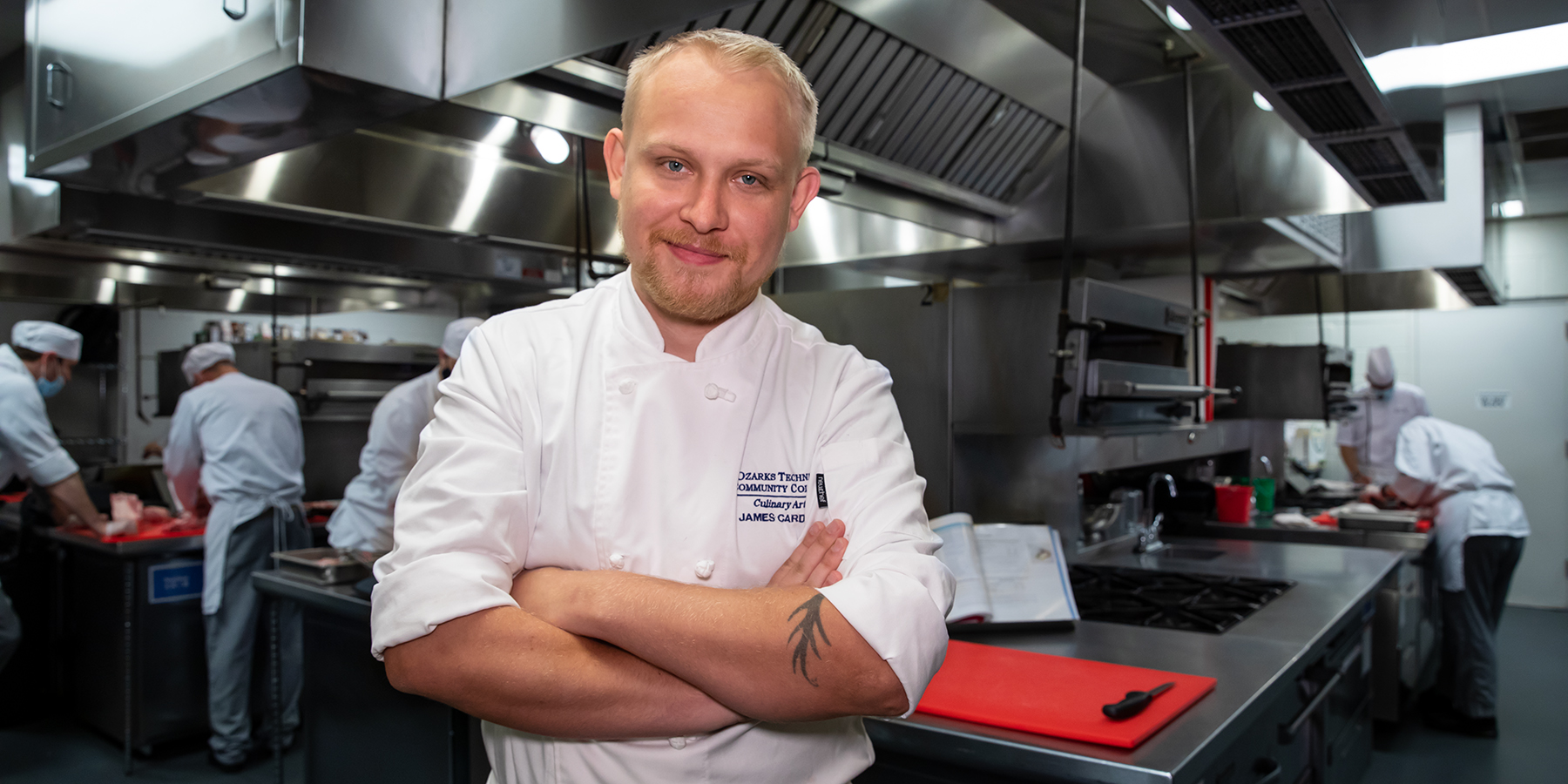 For OTC’s James Cardelli, persistence is about to pay off in a big way. The second-year culinary student will complete a stagiaire internship at a renowned Chicago restaurant this week. Newly opened in 2020, the restaurant – Ever – is the creation of Michelin-starred chef Curtis Duffy and his business partner Michael Muser.

James says he emailed and messaged the restaurant for months on end to secure his coveted spot as a stagiaire.

“In doing my research, the restaurant and the chef – specifically his background and philosophy on cooking – it really resonated with me,” James explained. “I was willing to do whatever it took to work as a part of his team.”

Located in Chicago’s Fulton Market, Ever gives off futuristic vibes with sleek architecture and modern lighting. Patrons can enjoy an 8- to 10-course tasting menu, with each plate presented as a piece of art. The upscale, fine-dining experience typically lasts two and a half hours. James said working in its kitchens would be an experience of a lifetime.

After near-daily attempts to contact Ever via email and social media, James decided it was time to shift tactics. He put himself on the reservation wait list and emailed the restaurant to inquire about his wait. In his email, he explained that he would love to experience Ever as a patron. But, more than anything, he simply wanted the opportunity to learn in the kitchen.

And his new approach worked – James finally got his ‘yes’ from Ever.

During his week-long stagiaire, James will clock 12-to-16-hour workdays in the kitchen. But James – never one to shy away from a challenge – is ready to embrace the rigorous schedule.

“In order to reach a certain level in this field, you’ve got to put in the work,” he said with determination and grit.

One of James’ culinary instructors, Chef Daniel Pliska, said he wasn’t surprised to learn of his student’s prestigious stagiaire internship.

“James portrays a drive to learn and a rise to excellence that is very uncommon these days,” Chef Pliska explained. “As my student, he’s always been willing to do whatever is needed to advance his skills.”

Just like Ever’s creator, Chef Curtis Duffy, James hopes to become a Michelin-starred chef himself. He wants to be the best in America, if not the world. And one thing is certain in James’ pursuit – his persistence and work ethic will only help him get there.

Accredited by the American Culinary Federation Education Foundation Accrediting Commission, the OTC Culinary Arts Program provides students a hands-on way to turn their passion into employment. Students may choose one of two emphasis areas: culinary arts or baking and pastry. Upon completion, students receive an Association of Applied Science of Culinary Arts. For an expedited path to employment in baking, students may acquire a Culinary Arts – Baking Arts Certificate; this one year program is a concentration of course work specific to employment in the baking and pastry field.