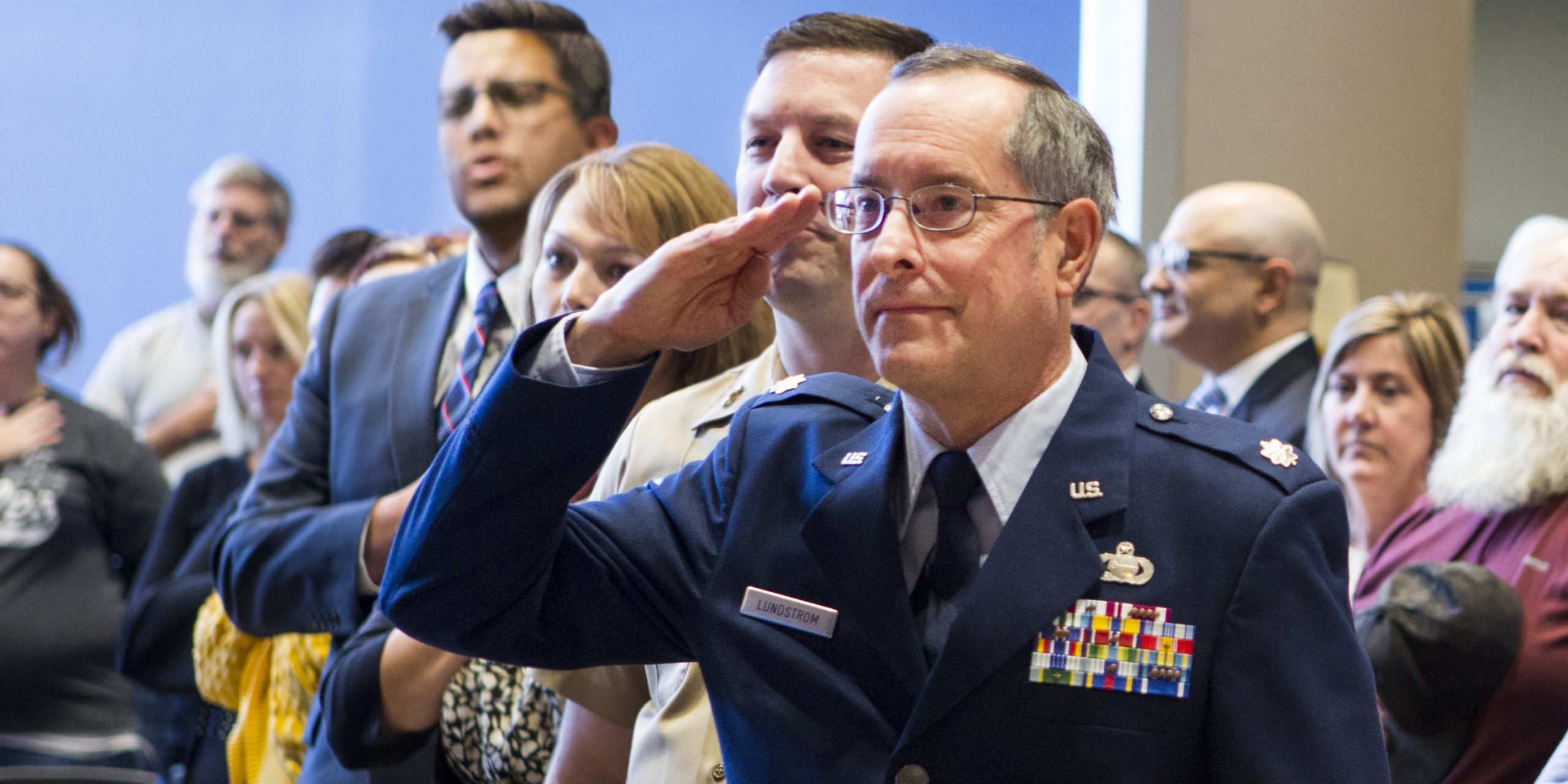 OTC’s Dr. Loren Lundstrom survived one of the deadliest days in modern American history. The now-retired Lieutenant Colonel was one of about 20,000 government employees working in the Pentagon when American Airlines flight 77 hit the building at 9:37 a.m. on Sept. 11, 2001.

The consequences of the attack, coupled with his robust military career, give Dr. Lundstrom’s work at OTC a unique perspective. As dean of student development, Dr. Lundstrom serves both veterans and international students in their pursuit of higher education.

At the time of the Sept. 11 terrorist attack, Dr. Lundstrom worked in the Pentagon as an intelligence officer for the United States Air Force. He was in a training session on the fourth floor of the building when he heard an explosion in the wedge of the building adjacent to his. The entire building shook briefly like an earthquake, and an intercom ordered people to evacuate. Initially, Dr. Lundstrom suspected a car bomb and felt leery vacating the building, thinking there could possibly be a second explosion once everyone had gathered outside.

“I remember stepping on the cement steps, which were covered in shattered glass,” he recalled. “I looked up and saw the darkest, blackest smoke I’ve ever seen, just billowing over the top of the Pentagon, and I knew then that it wasn’t a car bomb. It was something a lot worse.”

That day, 125 military personnel and civilians were killed in the Pentagon, along with all 64 people aboard the airliner. A total of 2,996 people died in the coordinated Sept. 11 attacks.

Patriot Day marks 19 years since the 2001 terrorist attacks on the World Trade Center, the Pentagon, and honors those who perished when the hijacked United Airlines Flight 93 crashed in Pennsylvania. Dr. Lundstrom says he has since found creative and different ways to cope with the events that transpired that day.

“After the attack, we were encouraged to visit with a psychologist or psychiatrist at the Pentagon,” he said. “At one point, I remember being encouraged to give presentations to help process what happened.”

While Dr. Lundstrom didn’t think much of the advice at the time, he revisited the idea in retirement. He has since spoken to dozens of college, community and veteran groups to bring awareness to the threat of terrorism.

A long-held expert on the subject, Dr. Lundstrom’s involvement in counter-terrorism dates back to 1983 with the bombing of the Marine Barracks in Beirut. His unit stationed in the Mediterranean provided intelligence support to the US forces in Lebanon. He was also involved with counter-terrorism and force protection planning efforts while assigned to Sarajevo during the Bosnian War. Later, as the director of intelligence for the US 13th Air Force, his unit on Guam was responsible for monitoring and reporting on terrorist activities in Asia and the Pacific. More recently, Dr. Lundstrom was assigned to the Air Force’s Intelligence Directorate in the Pentagon. His final tour of duty was at CIA Headquarters in Langley, Virginia, where he served as the executive officer for the Associate Director of Central Intelligence for Military Support.

Upon retirement, Dr. Lundstrom and his family moved to the Midwest, settling in the college town of Springfield, where he taught per course at Missouri State, OTC and Webster University. Over time, his roles and responsibilities grew at OTC. He was named dean of student development at the college in 2006.

Today, Dr. Lundstrom’s impact in this role extends far beyond the OTC System. His work with veteran and international students is far-reaching at the college and in the community.

“The average person cannot comprehend the sacrifices our service men and women make – they need special support and attention,” he said earnestly. “And that’s one of the things that I’m trying to do for them at OTC, garner support for our veterans from the college and the community at large.”

Dr. Lundstrom says his time spent overseas in the military also fostered an appreciation for other cultures and people – a trait that serves him well directing OTC’s international programs.

“Those experiences helped me realize how much we have in common with people from other nations and backgrounds – we face a lot of the same challenges,” he said. “We love our families. We work hard and we’re proud of our heritage. We’re more alike than we are different, and I want international students at OTC to feel welcomed and appreciated.”

Between his heroic military career and his selfless service to the college, Dr. Lundstrom’s work has impacted the lives of many in their quest for higher education and the American Dream.