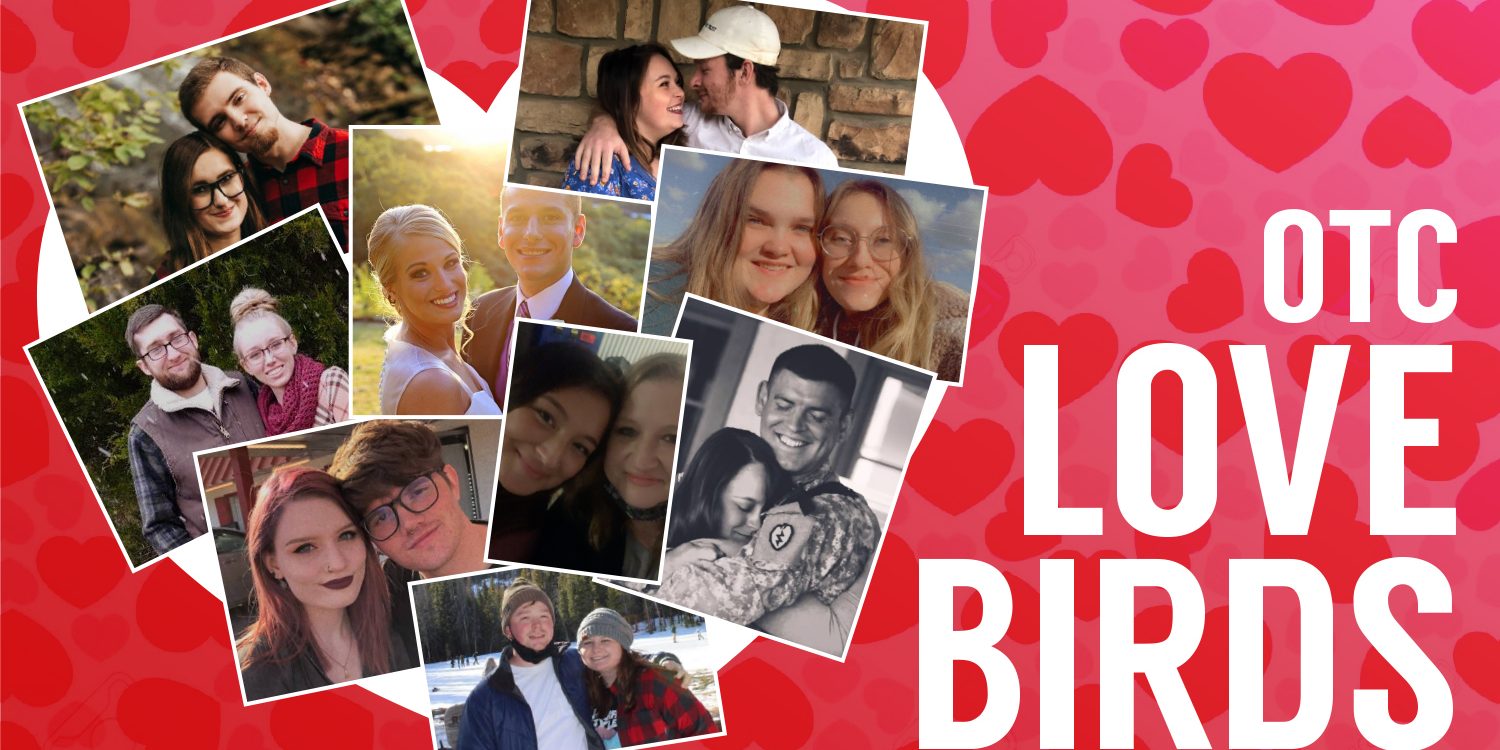 We recently asked the Eagle community to tell us how they met their spouse, significant other – or even their best friend – at OTC.

Here are their heartwarming stories. 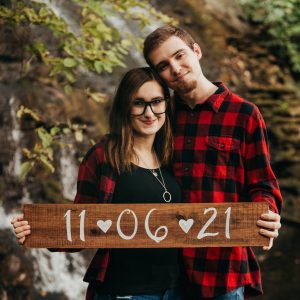 “My fiancé, Joseph Sanders, and I originally met in high school but reconnected and began dating once we got to OTC. I happened to see him in the hallway, and we began talking again. He would walk me to class and even transferred to the Springfield campus to see me more. In fact, he proposed to me behind the stairs of Information Commons. I am currently studying to be a certified medical assistant, and Josh is in the EMT program. We are getting married this November.” – Grace Helle 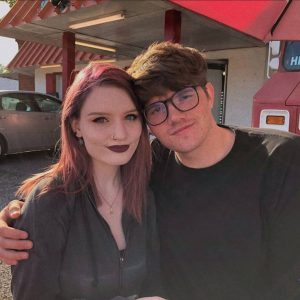 “My boyfriend, Braxton, and I originally became Facebook friends in July of 2019. We finally met in person in September of that year and became best friends. We soon realized we liked each other and began dating that next month. We’ve had many good memories together at OTC, like first meeting in NKM on complete accident and all our hangouts on the couches between ICE and ICW since then. He’s my first real love, and OTC truly did bring us together.” – Santana Recla 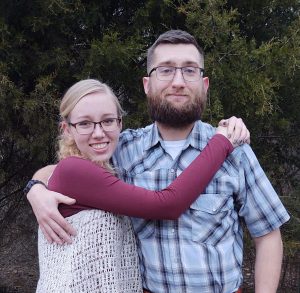 “Matt Clayton and I met last semester in our principles of business class. Our instructor grouped us together for a semester-long project, based on how we answered a few basic questions about ourselves and our interests – we just happened to have several things in common. I was one of the quietest people in the class, but Matt thought I was pretty cool from the start. As we began to talk more, everything just seemed to fall into place. I think it’s pretty amazing that we started dating during a pandemic, where we could only see each other’s personality and eyes at first!” – Kaylea Rice 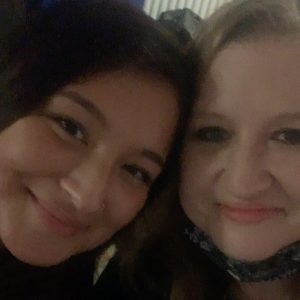 “Betsy Rojas is not my significant other, but she is someone who is near and dear to my heart. I met her in class during my first semester at OTC, and I am so lucky to have her in my life. I love her spirit, her soul, and I’m glad we get to navigate this wonderful experience together.” – Alicia Dunn 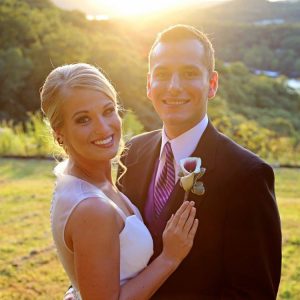 “It was the start of the 2010 fall semester, and I was beaming with excitement as I was starting my new job as a student ambassador. There was this one guy, named Danny, who worked at the front desk and immediately caught my attention. He had dreamy eyes, a smile that said he was up to no good, and a shaggy hair cut. Yup. I was in trouble, but I had just gotten out of a relationship. I wasn’t looking for anything, so I carried on and focused on my new job and school.

Well, as I’m sure you guessed, being around each other in the office made ignoring those feelings kind of impossible. We’d talk during my shift, chat on Facebook after classes (and maybe during) and I found myself being excited to see him the next day. However, I wasn’t sure if he had the same feelings about me. Thanksgiving break was creeping up and he hadn’t even asked me for my phone number yet. The day before break, I finally got irritated. I was getting ready to clock out and sent him an instant message that said, “If you need someone to beat you at guitar hero over break, here’s my number.” I didn’t have the slightest idea how to play guitar hero, but I was hoping he’d call.

He did call and here we are eleven years later. We’ve been married for five years, have traveled the world, bought our dream home and have the most amazing two-year-old twins. After my time as an ambassador was over, I pursued a banking career, but Danny is still at OTC in Administrative Services. Our kids love to come to campus to see the construction sites and we love showing them where it all began.” – Sarah Gutirrez 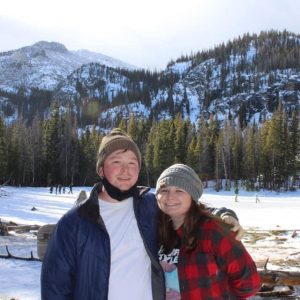 “My boyfriend Josh Hickman and I first met at the start of the spring 2019 semester. I was waiting in line at the OTC Bookstore, when I noticed a cute guy had walked in. Being a very shy person, I didn’t say anything to him and continued to stare at my phone while I waited in line. Next thing I know, he tapped on my shoulder, asked me about my day, and proceeded to invite me to Texas Roadhouse later that night. We went out on that date and clicked instantly. Today, Josh is a traveling respiratory therapist, and I’m continuing my education. We just bought our first house together and have two dachshunds. One day, I asked him why he had approached me in the bookstore. He told me that, from the moment he saw me, he knew I was the one for him.” – Madison Feeback 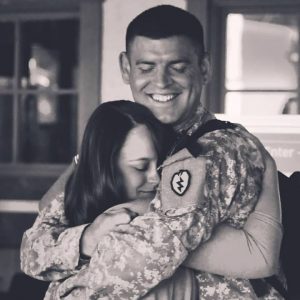 “My husband Arthur and I met at OTC in the fall of 2006. We were both students in Dr. Robert Griffith’s ENG 101 course at the Branson Education Center. OTC has had a big impact on our lives, personally and professionally. We are both OTC grads, and my husband is now enrolled in the ASN program. I have been an OTC employee since 2016. We are incredibly grateful for all of the opportunities OTC has provided to us. Arthur and I have been married for seven years and have two children.” – Amy Donovan Munier 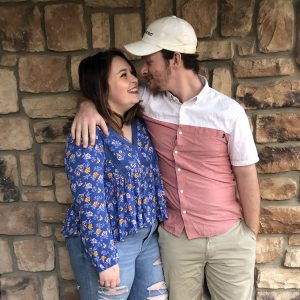 “Jenzen and I were actually friends in high school. After graduation, I went to MSU and he went to OTC. I ended up transferring to OTC and we randomly had public speaking together. We had grown apart a little before that, but having the class together kind of solidified our previous friendship. We got really close and were inseparable best friends for years through other significant others and huge life changes. Two years ago, the timing was finally right for us and he told me how he felt. Now we’re getting married!” – Ashlyn Russell 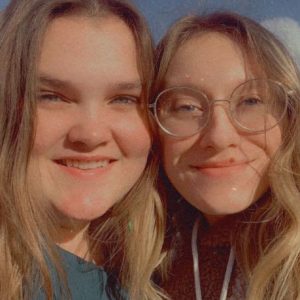 “My best friend, Camrie, and I met in OTC’s choir in 2019. During that time, I had been struggling with major depression and anxiety, and I had kind of lost hope through it all. But God sent Cam into my life when I needed her most. We aren’t in a relationship, but she is my best friend. Thank you, OTC, for putting us in the same building. This friendship is going to last a lifetime!!” – Savannah Bess