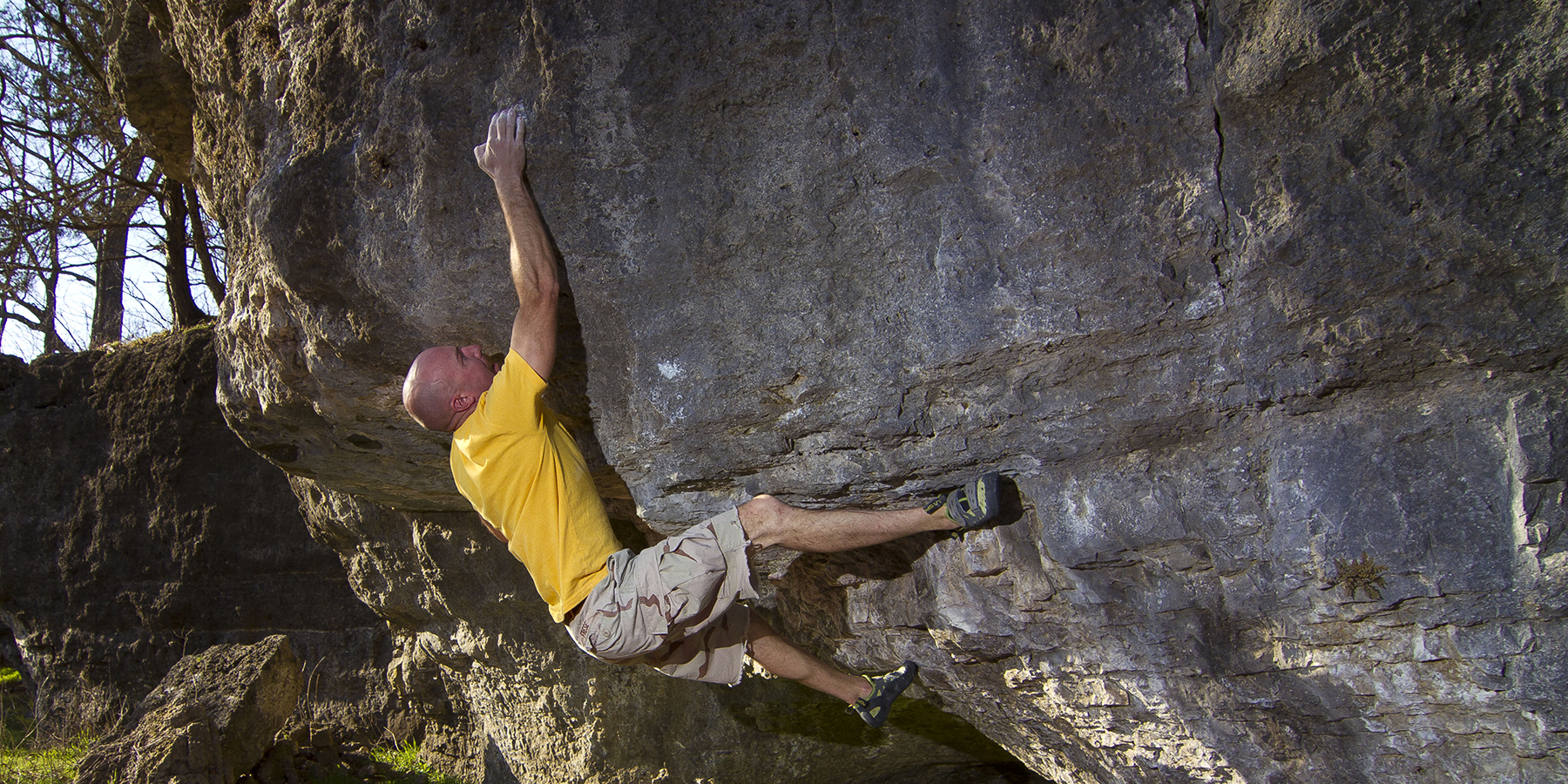 Around OTC, few people know Justin Frese beyond his role as a construction technology instructor. Outside of the classroom, however, Justin has a mission: making climbing accessible in Southwest Missouri.

An article in “Climbing” magazine names Justin Frese as one of, “the area’s most active developers, pushing the envelope every climbable day, year-round.”

“The rock climbing in Missouri is really, really good, but it’s just nobody knows about it,” Justin said.

Justin chose teaching for a career because of pedigree and passion. Both of his parents were educators. Plus, teaching leaves his summers and weekends free for climbing.

“Most of the major decisions in my life have come back to what’s going to keep me climbing more,” Justin said.

Justin came to the sport in the early nineties when a family friend took the 11-year-old Justin to a rock climbing gym in Springfield.

“It was dirty, the floors were concrete and there were mattresses on the floor for padding,” Justin said. “I can honestly say, at 11 years old, the first time I went climbing, I was hooked. I knew that was what I was going to do.”

Once he caught the climbing bug in the gym, Justin ventured outside with more experienced climbers. He also taught his father how to belay him (a safety technique involving climbing rope), and the father-son duo would travel to the regional rock climbing Mecca at Sam’s Throne in Northwest Arkansas.

“My dad was such a good sport,” Justin said. “Now, it only takes a couple of hours. But back then, it was a 3-4 hour trip with all of the dirt roads and everything.”

After graduating from Fair Grove High School, Justin joined the Army reserves and began studying hotel and restaurant management at Missouri State. Not long into his college career, Justin was called up and sent to Iraq, where he served a 12-month tour of duty as a medical specialist. He was 21 years old.

“When I returned from Iraq, I didn’t want anything to do with college, so I started working construction,” Justin said. “I had carpentry experience from building houses during the summers when I was in high school.”

As Justin puts it, “a lot of life happened” in the six years between returning from Iraq and re-starting college for an industrial arts teaching degree from Missouri State. But much of that “life” involved climbing. In fact, Justin’s love of the sport has taken him all round North America. He’s scaled rock in British Columbia, Canada and Mexico’s Baja Peninsula, along with domestic climbing destinations in New York, Rhode Island, Colorado, Utah and Arkansas. Even with all that travel, Justin is passionate about the relatively untapped potential for rock climbing in the Ozarks.

“If you grow up in Colorado or California, you know rock climbers – it’s something people do. Around here you don’t find many people who say, ‘I’m going to go rock climbing this weekend’,” Justin said. “But, it’s becoming more and more popular.”

With a lifetime of climbing under his belt, Justin’s new passion is sharing and promoting the rock climbing culture in the Ozarks. He just published his first book called “Southwest Missouri Bouldering – Guide Book.”

Similar to rock climbing, bouldering involves a climber using his hands and feet to climb a rock formation. Unlike traditional rock climbing, though, the climber remains closer to the ground. In bouldering, the climber doesn’t use a rope. The only safety device is a crash pad — a thick cushion to protect climbers from the sharp rocks and hard ground should they fall.

“In bouldering, you have to do everything exactly right, which is why we call them bouldering problems,” Justin said. “It is 10 to 15 moves you have to figure out and complete or you fall to the ground.”

Justin is thankful he’s never broken any bones, but he has been knocked out a few times. As a husband and father of two young sons, he doesn’t push safety limits like he used to. Instead, he loves taking his two newest climbing partners into the woods for adventures.

“What I wanted to get at with this book is that rock climbing and bouldering are obtainable for people around here. You don’t have to drive three hours to Arkansas,” Justin said. “You don’t need a lot of expensive equipment — just a desire to get out on the rock.”

Justin’s book is available at climbsource.com.