OTC student bakes her way to the top 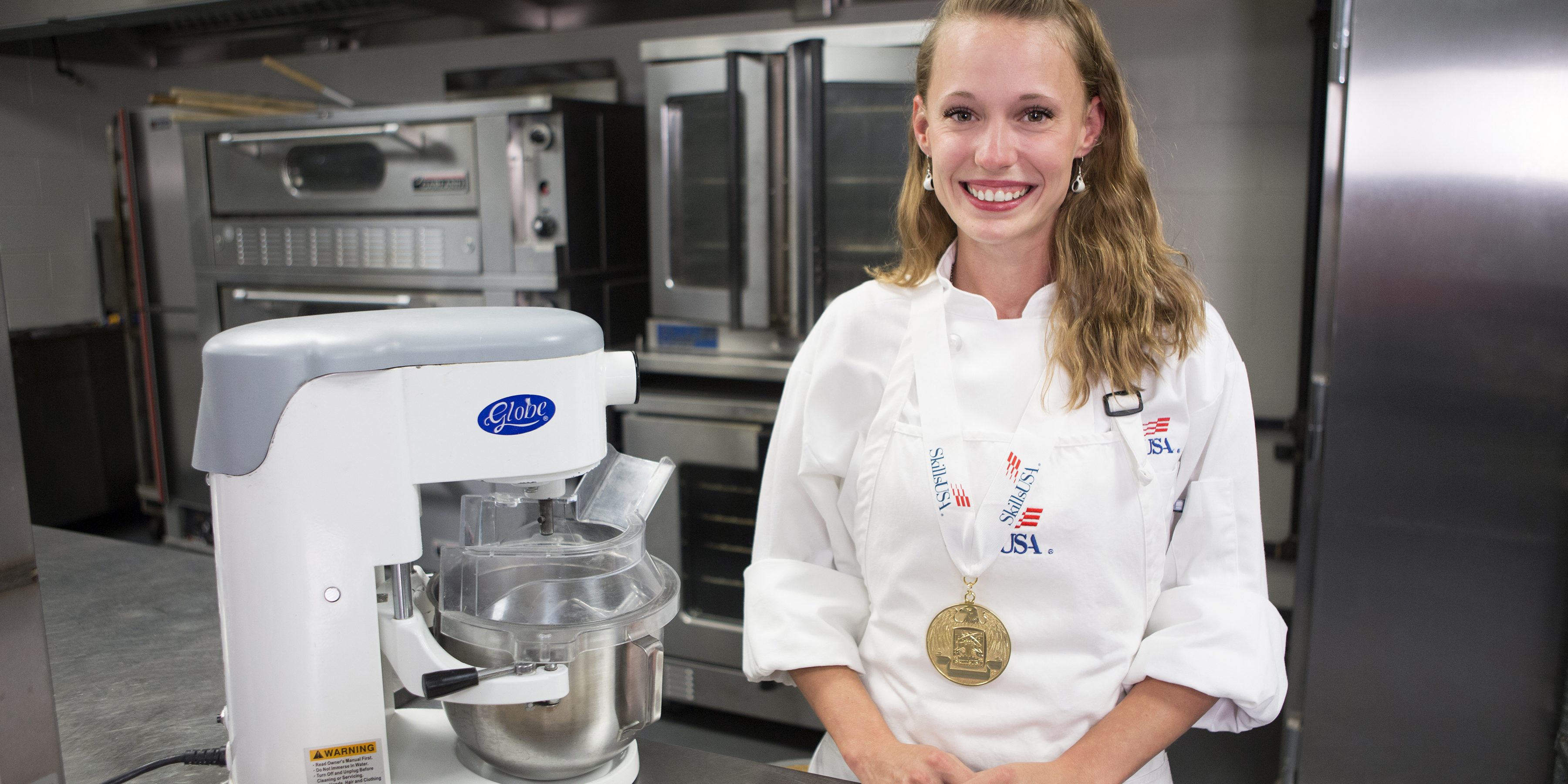 All it took were two words — chocolate and sugar — to convince Chantal Cheevers to enroll in the OTC Culinary Arts program where she eventually earned a national championship in commercial baking.

Chantal, who graduated from the OTC’s Culinary Arts program in May, won the gold medal in commercial baking at the national SkillsUSA championships held in Louisville, Ky. last week.

“I don’t know how I did it. I was completely shocked,” she said with the SkillsUSA gold medal draped around her neck.

Chantal came to OTC three years ago looking for a career change. She had worked in restaurants for eight years and wanted to go in a different direction.

But when she came across a baking class that involved working with chocolate and sugar, Chantal said, “Sign me up.”

This was the third year that Chantal, a Springfield native who attended Hillcrest High School, competed at SkillsUSA nationals. In 2015, she finished sixth, and she didn’t think her chances were much better this year.

“I was so disappointed with my products that I turned in,” Chantal said and called the competition the most difficult of the three years she has competed.

“I only had 20 minutes to decorate my cake. I almost didn’t make it,” she said.

Chantal was in the minority about her chances to win it all. When it came time to announce the champion, her mentor, OTC Instructor Chef Jeffrey Ward, knew she had won before Chantal’s name was called.

“I was standing with Chef Ward and he said my name before they announced the champion. I can’t believe he had that much faith in me. He knew it,” she said. “I jumped, screamed and yelled.”

Chantal gives Ward a lot of credit for her success.

“Chef Ward has taught me more than I ever thought I’d learn. He taught me to practice, do it better and practice more,” she said.

Ward is a big fan of Chantal’s work.

“Chantal is hard-working, dedicated and a bit of a perfectionist. She is passionate about baking and pastries and loves to decorate cakes. She has a very creative mind and is very artistic,” he said.

“When you show her a technique or skill, she will work at it until it is perfect. She was a pleasure to have as a student, and any employer would be lucky to have her.”

Chantal works at the Neighbor’s Mill Bakery & Café in south Springfield. She said when she returned to work this week she was greeted by her co-workers with lots of congratulations.

“It was exciting to go back to work. They all knew. They were all very proud,” she said.

Winning the national title earned Chantal a full-ride scholarship to the Culinary Institute of America in New York, the top culinary school in the country. She is still deciding what to do with the prize. She’s also earned baking certifications that will help build her resume.

Chantal said she wants to continue to earn more certifications including that of a certified pastry chef. She also likes making showpieces and decorating cakes, especially for her 11-year-old daughter, Kali, whom Chantal calls “my life.”

For now, Chantal will try to relax a little from the incredible high of being named a national champion.

“It’s unbelievable. I’m still so overwhelmed. I can’t believe I made it this far.”