OTC grad leads respiratory therapists in the fight against COVID-19 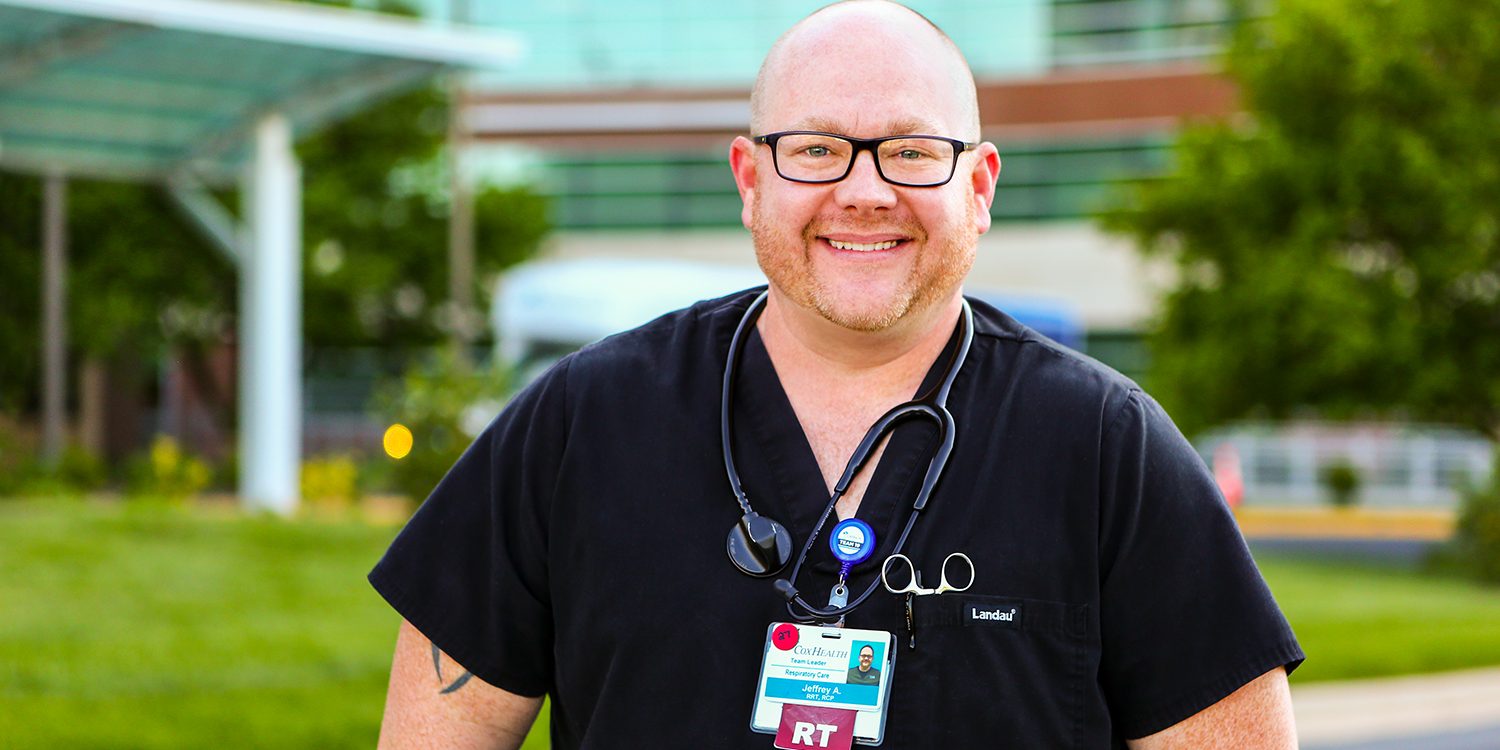 Nurses and physicians figure prominently in coverage of the COVID-19 pandemic. But there’s another vital group of health care professionals who don’t always get the same recognition: respiratory therapists. OTC graduate Jeff Atkinson is a prime example, having treated hundreds of COVID-19 patients at Cox South Hospital in Springfield.

Jeff is one of more than 100,000 respiratory therapists in the United States fighting this new, highly contagious illness. A 2011 graduate and former adjunct instructor in OTC’s Respiratory Therapy Program, Jeff says the coronavirus is unlike any disease he’s seen before.

“It’s not like we’re just treating pneumonia or acute respiratory distress syndrome,” he explained. “We’re treating a disease that affects the body’s ability to oxygenate.”

As a member of the Adult Critical Care Team Lead group at CoxHealth, Jeff helps direct other respiratory therapists at work. In an effort to help their patients breathe easier, Jeff and his team help install breathing tubes and carefully manage patients on ventilators, tasks that put them in close proximity to the virus.

“We take very few breaks during our 12-to-14-hour shifts, because putting on the proper personal protective equipment is such an ordeal,” Jeff explained. “We wear full-body coveralls, a HALO respirator, head cover, a face shield and head net on top of that – getting dressed takes about a full 10 minutes.”

At the onset of the pandemic, Cox South added an open-ward-style hospital wing on the fifth floor of its west tower. Healthcare and city officials hoped it would never be used, but now the 51-bed wing is nearly full with the most critically ill coronavirus patients.

“It’s got to be a nightmare for these patients, as they fight this virus without friends or family at their side,” Jeff said. “So, in the middle of everything else, we try to boost their morale as much as we can.”

As the number of COVID-19 cases continues to rise, Jeff says he and the other respiratory therapists and nurses on staff have become a close-knit team.

“We’re looking out for our patients – and each other,” Jeff said. “And now, our patients need us more than ever before.”

Jeff’s impact in the respiratory field extends far beyond his hospital work. For nearly a decade, Jeff also taught as an adjunct instructor in OTC’s Respiratory Therapy Program. He says many of his former students now work alongside him in the fight against the COVID-19 pandemic.

“I would take students who, initially, had zero knowledge in respiratory therapy, and – in a year’s time – work side by side with them on the most critically ill or injured patients,” he said. “It’s a rewarding feeling. Our line of work is so important, especially right now.”

From the classroom to the medical ward, Jeff is one of many healthcare heroes working tirelessly to serve the community in its time of need.