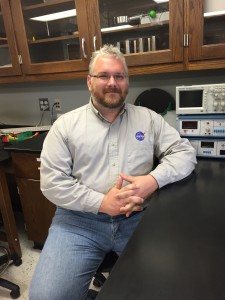 The 2011 OTC graduate doesn’t want to go anywhere on Earth because he has his eyes on the stars.

“To become an astronaut,” the Ozark resident replied when asked about his ultimate goal.

Crisman began working towards that goal while studying at OTC, where he graduated with a transfer degree before attending the University of North Dakota.

“It offered a space studies program, which is what I was looking for,” he said.

While at OTC, Crisman was named a NASA scholar as part of the National Community College Aerospace Scholars program. He was one of the students selected to study at the Marshall Space Center in Huntsville, Ala., after his design for a land rover was accepted and replicated at the center. The design won top honors.

Crisman’s interest was piqued during one of NASA’s darkest days.

“I remember watching the Challenger disaster. People put so much into the program, including their lives. They were willing to risk themselves to learn science and push themselves,” he said.

“If I can’t be an astronaut, I am extremely fascinated with human factors and doing research on people in extreme environments, such as space, and the tools they would need in those environments.”

While studying at North Dakota, he interned at the Marshall Space Center, and he’ll return to Huntsville this fall to be a facilitator in the next scholar program.

At Marshall, Crisman was struck by the spirit of those who had taken the space program so far over the past 50 years.

“One night I was in this giant building by myself. There were pictures all over the walls of those who had been there before, like (scientist) Werner van Braun, several astronauts and President Kennedy,” Crisman said.

“At that moment, I felt like I belonged, that I was part of this building, plugging along on my project.”

Space has always been of keen interest to Chrisman, who was a member of the Phi Theta Kappa honors society while at OTC. He was also awarded a Missouri Community College Association annual student award while OTC.

Crisman graduated from North Dakota with a degree in psychology and a minor in biology. He is making plans now to continue his education and seek a master’s degree.

Crisman said he is thankful for the people he met and learned under at OTC and credits them for helping him get to where he is today.

“PTK (Phi Theta Kappa) and Steve and Jo Fritts really push you outside your box. I probably wouldn’t have applied for the space program if it weren’t for them. I wouldn’t have gotten started,” he said.