OTC community rallies to support an overlooked cause 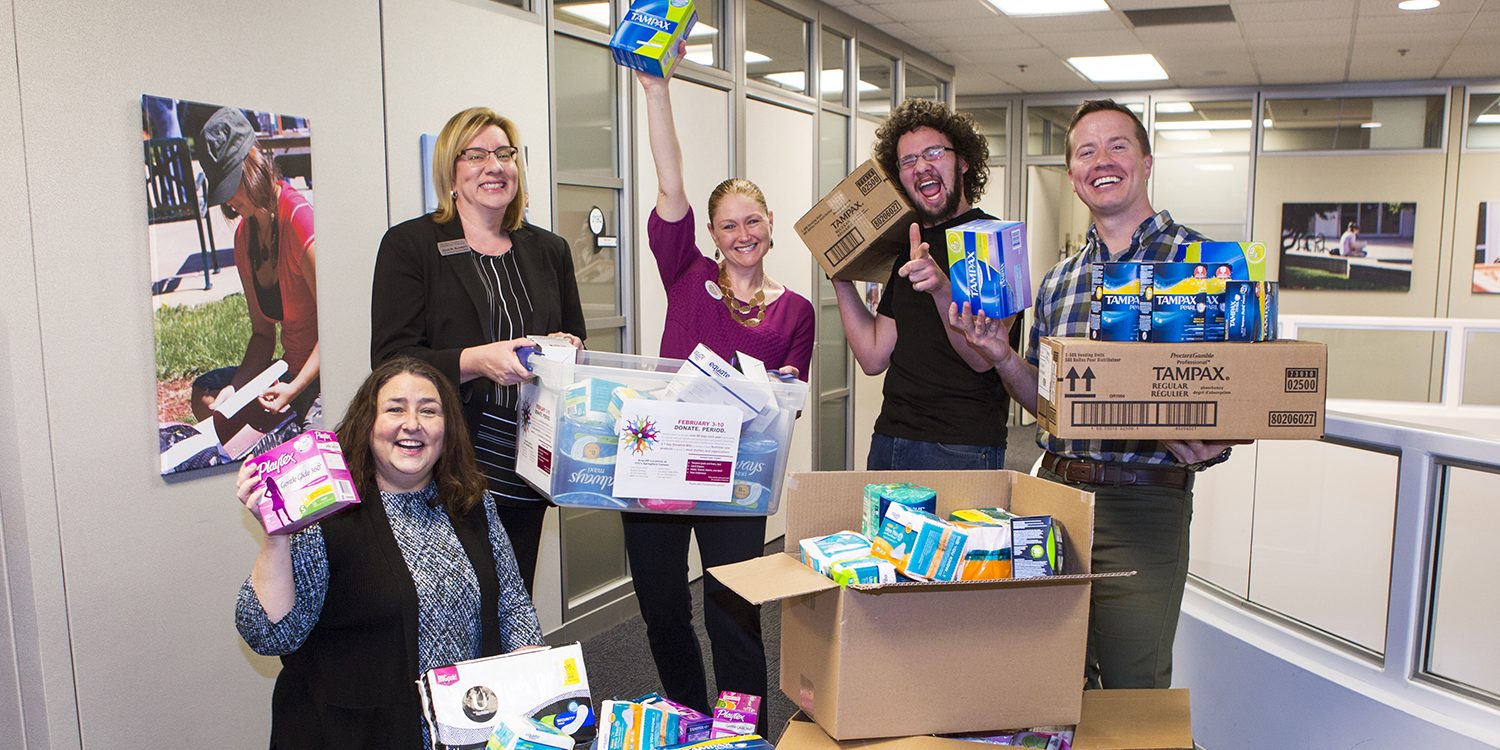 If you ask a female friend or relative, it’s likely she can tick off a list of funny or embarrassing stories about “that time of the month.” But for thousands of homeless women across the country, periods are no laughing matter.

According to the U.S. Department of Housing and Urban Development, more than 50,000 women live unsheltered on the street every year. And these women face unthinkable decisions when their periods arrive each month: Do they buy feminine hygiene products…or do they go without meals for a day?

A group of OTC folks, both women and men, recently did their part to help local homeless women who face these difficult questions on a monthly basis.

A viral video titled “How do homeless women cope with their periods?” caught the attention of OTC instructor Jennifer Dunkel. She watched the 6-minute film on her Facebook feed and couldn’t believe she had never thought about this critical need before.

“It’s heartbreaking to think that some women have to make the choice between taking care of themselves and eating,” she said. “And this issue is so sensitive and private. Periods are still something that we don’t talk about, but we need to.”

Jennifer shared the video on her Facebook account and paired it with a simple question, “Tampon drive, anyone?”

Within minutes, her female colleagues left a flurry of comments and coordinated a quick planning meeting at OTC’s Starbucks. A week later, the Donate. Period. Drive was born.

The group of six women agreed they wanted to keep the drive informal, so they used simple, grassroots tactics to spread the word. They created and distributed fliers, sent emails to colleagues and mentioned the drive to their students in class. They requested everything from tampons to pads to underwear, wipes and even over-the-counter pain relief medication.

“When we think about caring for the homeless, we think about food, shelter ─ those day-to-day basic needs ─ but that one week out of every month? It’s unimaginable to think about not having those necessary self-care products,” Jennifer said.

“I got the flier in my mailbox on a Friday, and I mentioned it to my girlfriend over the weekend,” he said. “She helped me understand how big of a deal this actually is.”

That following week, Robert shared the flier with his students. He encouraged them to donate products, and he also promised to match their monetary donations for the drive up to $100. A few days later, OTC student Christopher Baunach approached Robert with a $100 bill.

“I was shocked when I realized Chris was matching my $100 pledge,” Robert said. “I told him he didn’t have to donate that much, and that a single dollar would have been plenty ─ because I was donating $100 regardless ─ but his response was ‘It’s a good cause, and I wanted to help out.’”

“A lot of people see giving as something painful, but I believe we don’t have enough chances to give in life,” Chris said.

After Robert and Chris pooled their funds together, the two purchased 1,500 tampons online from Amazon Prime.

“I saw a giant Amazon Prime truck pull up to campus the other day, and I smiled when I thought about what might be in there,” Chris joked. “It’s been an interesting semester so far, that’s for sure.”

In total, the week-long Donate. Period. Drive collected more than 5,000 tampons, 4,652 pads and liners, 429 hygiene cloths and wipes, 223 pairs of underwear and 23 boxes of pain-relief pills. While the drive originated at the Springfield campus, students, faculty and staff from the Richwood Valley campus and centers in Lebanon and Waynesville contributed to the cause as well.

A majority of the feminine hygiene products were donated to Safe to Sleep, a temporary women’s homeless shelter, and Rare Breed, a service of The Kitchen, Inc. that provides assistance to homeless, runaway and at-risk youth. A small portion of the products were saved for OTC students in need.

The women behind the Donate. Period. Drive were thrilled with the outpouring of support shown by the OTC community.

“Sometimes, it can feel like there isn’t enough kindness in the world, especially with all the negative messages that come through our media feeds, but we can change that,” said Jennifer. “What hit me the most throughout this experience was how many people responded with such enthusiasm and generosity for donating period products. It feels good to do good.”