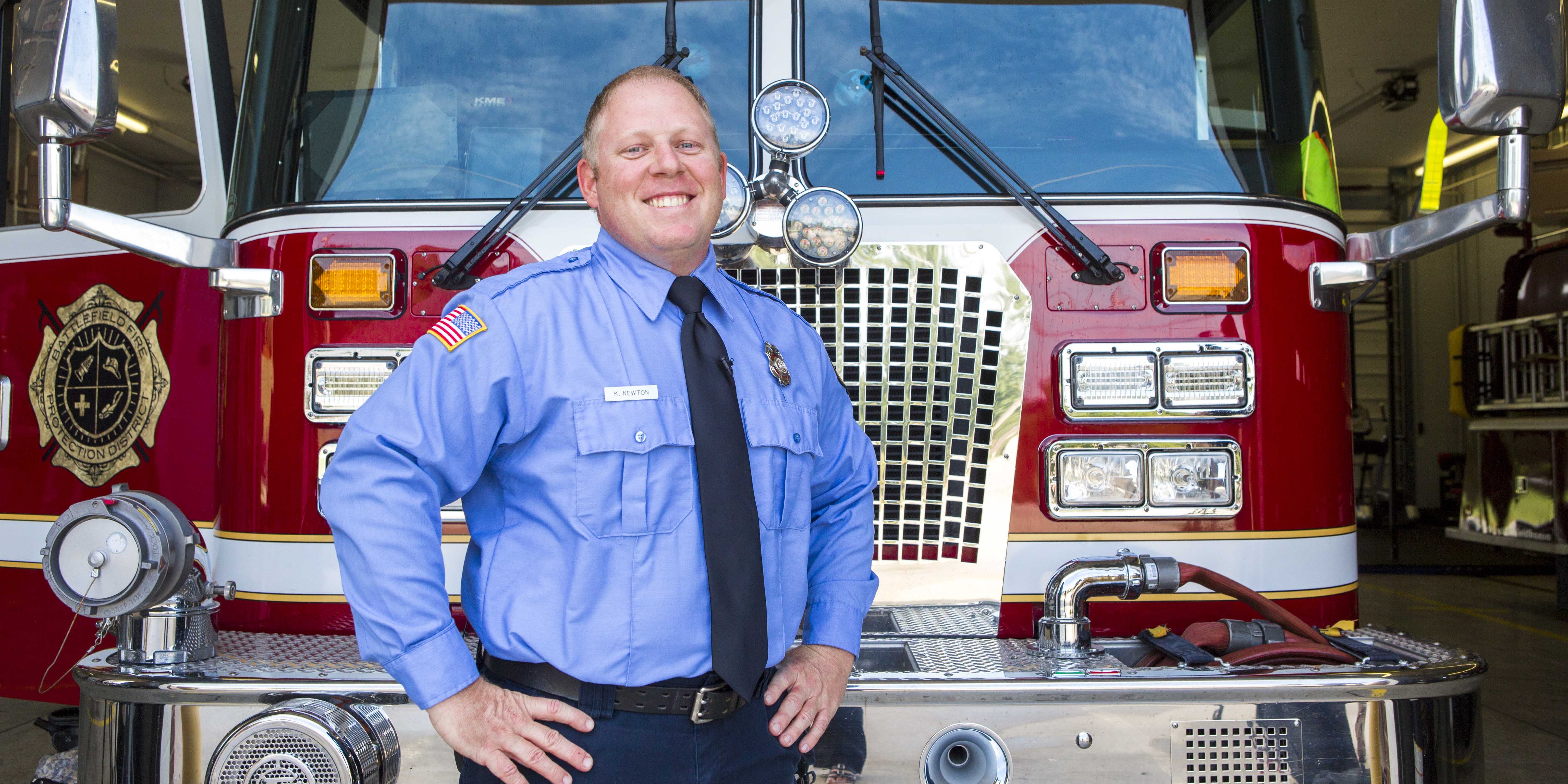 Battlefield firefighter Kevin Newton loves to talk about his job and the education he received at OTC. He often tells people that two days a week he lives in a multi-million-dollar house, drives a $500,000 vehicle and wears a $6,000 suit.

“Then I tell them, I’m a firefighter and you can become one too at OTC,” Kevin said.

After growing up in central California, Kevin’s parents moved to southwest Missouri where Kevin enrolled at OTC in 1998 to become a paramedic. Kevin’s educational path had several interruptions and detours over the years. But after watching the New York firefighters run towards danger on 9-11, Kevin knew he wanted to become a firefighter.

“I found my calling then. I wanted to be a fireman,” he said.

First though, Kevin decided to serve his country and joined the U.S. Navy in 2003. He completed four tours of duty overseas as a Navy medic, serving with a U.S. Marine infantry unit in Iraq and then serving in Afghanistan.

“After my military service, I knew I had found my calling in fire service and enrolled again at OTC. I wanted to finish my associate degree in fire science,” he said.

Kevin said he felt a little out of place coming back to school from a combat environment.

“I didn’t know what I was getting into. I knew what firefighting entailed but not what a degree would look like,” he said. “I heard Chief (OTC instructor Danny Whisler) made you work. He expected the best out of us. I was used to that in the military.”

“Kevin worked hard, applied himself and became—not just a good student—but a real asset to the program. Kevin is a prime example of how OTC can assist our military personnel and help them put their experiences to work to benefit our community and become a qualified and respected professional.”

While taking classes at OTC, Kevin was able to earn a position with the Battlefield Fire Department.

“I got to work for Battlefield while going through OTC’s fire science program. Whisler told me they had a live-in residence program. Battlefield has a station that is empty and if you have the right credentials, you can live in it rent free, but you are required to be there 60 hours a week as a volunteer,” he said.

In 2015, the department was hiring and selected Kevin, from the top of the candidate list, as its new full-time fireman. Now, Kevin and Whisler work together to give other OTC fire science graduates a shot at full-time firefighter work.