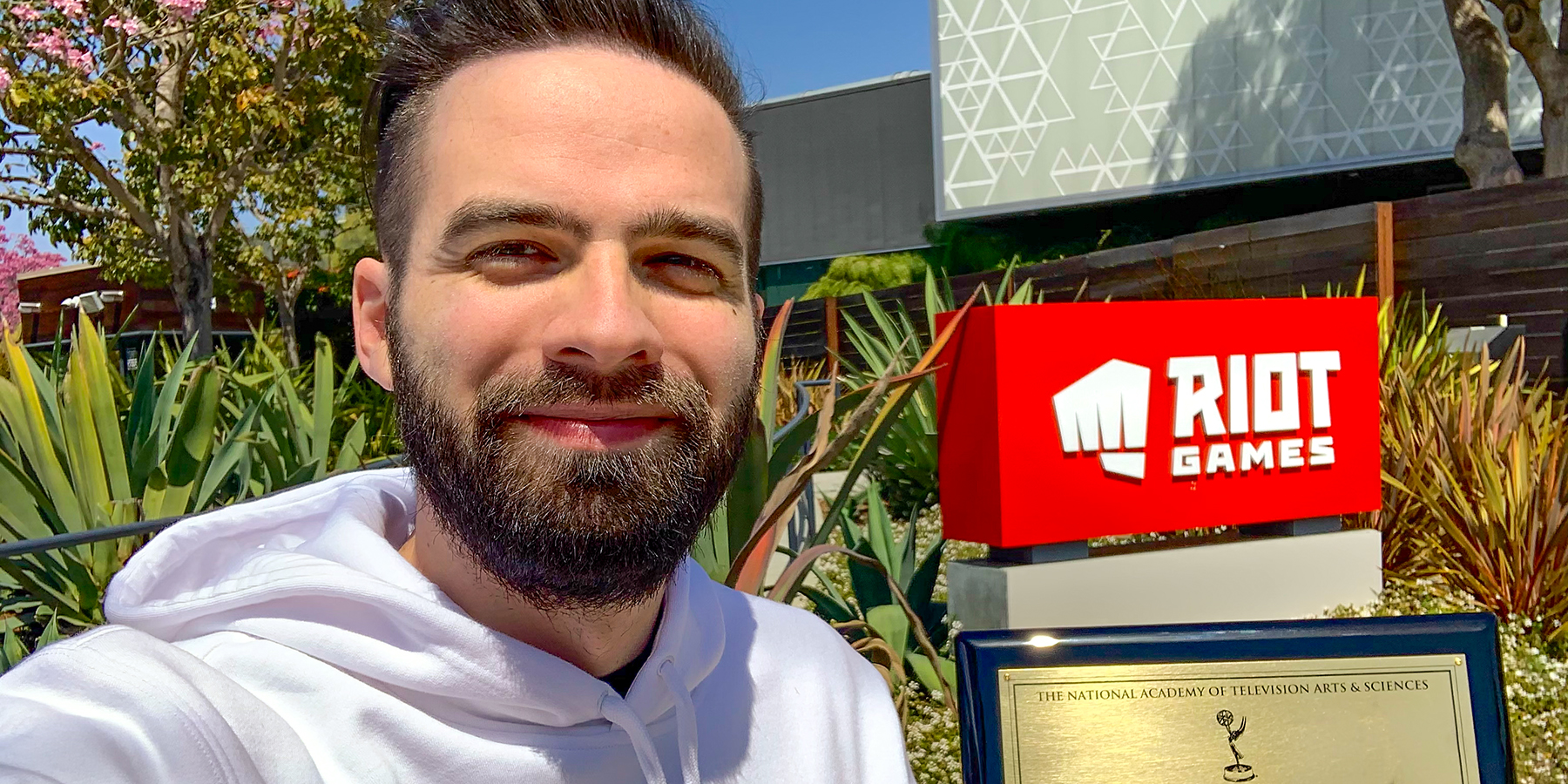 OTC graduate Jared Smith risked it all when he quit his local news media job to move to Los Angeles without the promise of employment. But his professional gamble paid off in a big way. Within months of relocating, the lifelong video game enthusiast landed a job with Riot Games, a world-renown video game developer and publisher.

“I broadcast people playing video games in professional leagues,” Jared explained. “It’s the biggest niche in the world, honestly,” he added with a laugh.

Jared started out as a live broadcast editor for Riot Games, but he was quickly promoted to live edit producer. Now, he oversees a team of editors as they stream and recap esports tournaments. In fact, his team’s graphics work and coverage of the League of Legends World Championships won Emmy Awards in 2017 and 2019.

“It’s pretty surreal,” he said. “Getting to do what I do is rewarding enough, and winning the Emmys is just the cherry on top.”

Jared’s obsession with video games started early – he remembers gaming with his dad and brother at just 5 years old. Later in high school, Jared developed an interest in video production. He and his friends tele-broadcasted the school’s morning announcements through a class they took together.

“That’s where I discovered I had a knack for video editing – and all the creative elements of video production,” he explained. “So, when it came time to choose a college major, I asked myself, ‘What do I actually have a lot of fun doing and enjoy? What can I see myself doing and not hating life?’ Media production was the most realistic route I could see for myself.”

Once Jared picked a career pathway, he said his decision to attend community college over a four-year university was an easy one to make.

“A teacher once told me, in my career field, it all boils down to experience,” he explained. “Community colleges give you that hands-on experience immediately, whereas, four-year schools make you study theory and concepts years before getting your hands on a camera.”

Jared enrolled in OTC’s Electronic Media Production Program in the fall of 2013. Once he graduated, he secured a job at Ozarks Fox KRBK in Springfield. But, after nine months of working as a production assistant and news photographer, Jared felt he was destined for something different.

“By that point, I knew Riot Games was the goal – the dream job. When I wasn’t working, I was consuming their gaming broadcasts. Like, I could only dream I’d one day be cool enough to work for them,” he said.

Knowing the importance of networking in a job search, Jared hopped on LinkedIn to see if he had any connections to Riot Games. And sure enough, he found a friend of a friend who worked for the company.

After submitting his resume and talking with a recruiter, Jared learned Riot Games preferred to hire locally for some positions. So, he quit his job and made the 24-hour drive out to LA where he crashed on a friend’s couch. He let the recruiter know once he was out there.

Not long after that, Jared began a rigorous screening process that culminated in a five-hour-long interview onsite. And now, five years later, he says landing the job still doesn’t feel real.

“It just goes to show, if you just have a passion for something and you share it with the right people, you’re going to end up in the right place,” he said, assuredly.