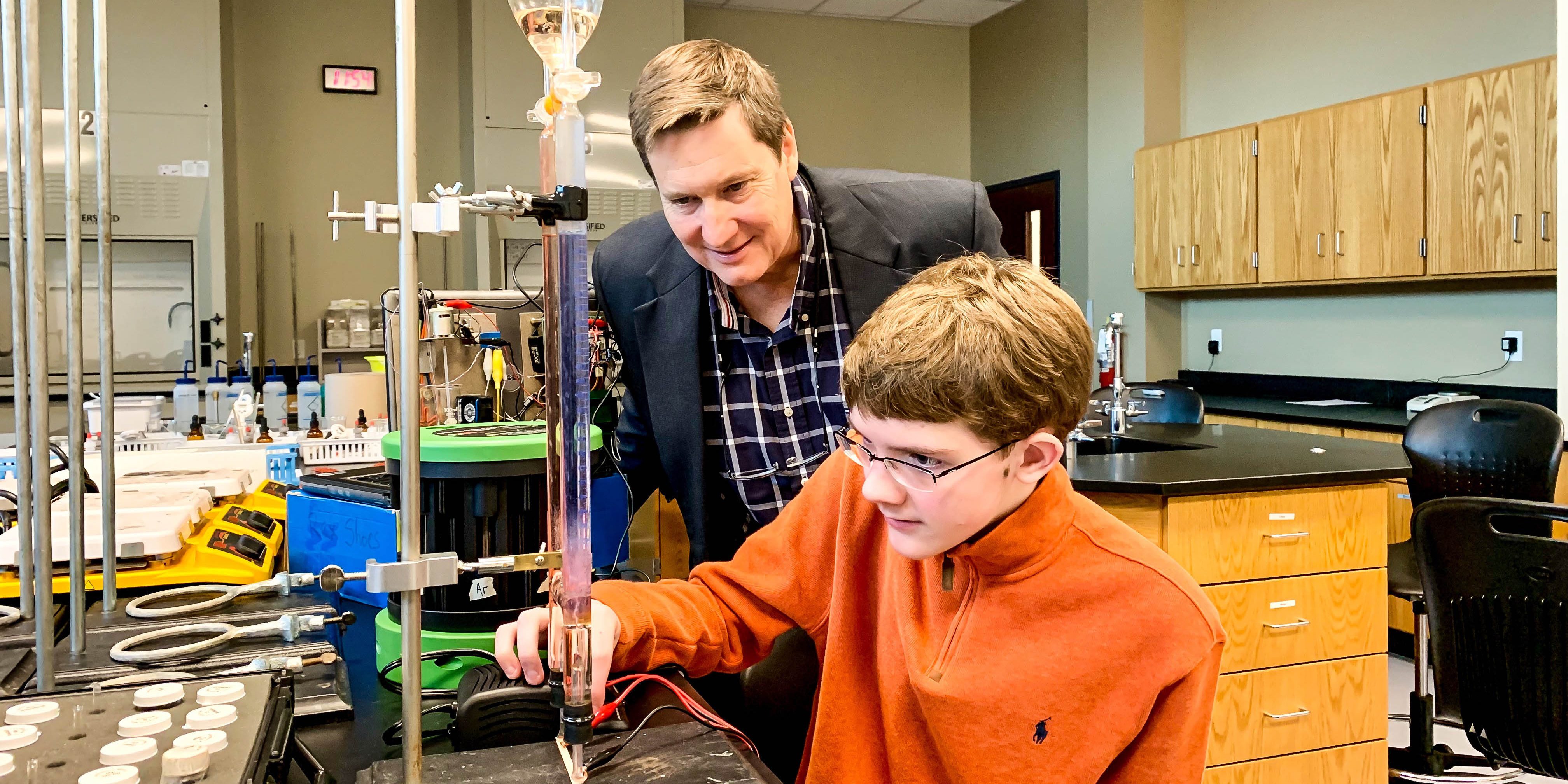 Ozarks Technical Community College helps all types of students achieve their goals – whether it’s the first-time freshman hoping to transfer to a four-year institution or the returning student looking to advance in a career. But what about the 14-year-old, gifted, homeschooled student headed for a Research I institution? As it turns out, OTC has a plan for that student too.

Just a few days shy of his 14th birthday, Matthew Parker earned a perfect score on his ACT. His parents, not quite ready to send him off to a four-year university, reached out to their local community college for help.

“The plan has always been that I will go to CalTech or MIT when I’m 18,” Matthew explained. “But in the meantime, we were looking for ways I could experience a college education and atmosphere while remaining close to home.”

So Matthew and his parents, John and Christine, met with college administrators at the OTC Table Rock Campus to formulate a plan. As a result, Matthew began auditing a chemistry course on campus in the fall of 2018. His instructor, Rex Gerald, Ph.D., is a retired chemical physicist who used to work at the Argonne National Laboratory in Chicago. Rex said the opportunity has been a great learning experience for both Matthew and the students in his class.

“Not only does Matthew participate in research with me, which was a large draw for him to come here, but he also participates in the classroom,” Rex said. “And since he’s already familiar with the material, Matthew is helping other students with the learning process, and the students are responding well to his assistance – so it’s become quite an interesting dynamic.”

Matthew agreed, stating that the interpersonal relationships he is creating with other students are just as valuable as the research and experiments he’s conducting in class.

“I’ve taken online college courses before, but you miss out on that face-to-face interaction,” he explained. “That’s what I’ve loved most about the Table Rock campus – the personal interactions I’m having with the other students.”

Earlier this semester, Matthew attended a conference at the University of Tennessee at Martin where he presented his collaborative research on three different projects. The first analyzed the impact of knowledge in decision making. The second featured a scaled-down system for industrial-scale liquid processes and the third highlighted a laser-based system for forensic analysis.

“It was wonderful to represent OTC at an official undergraduate conference,” Matthew said. “I enjoyed discussing research projects with other students and presenting my own findings.”

At the end of the conference, Matthew received an award for giving one of the best oral presentations there. He will present his research again at another undergraduate research conference held next month at Missouri S&T in Rolla.

“It is unique for a student to engage in such cutting-edge research at a community college, and we are very proud of Matthew’s efforts,” Rex said. “I hope his work will continue to inspire and encourage other OTC students to consider science research as a possible pursuit.”

Looking ahead, Matthew predicts he will continue auditing classes and conducting research at the OTC Table Rock Campus until he’s ready to pursue an education at the four-year college or university of his choice. He hopes to become a theoretical physicist someday.

“I want to explore the basic fundamental nature of what’s around us – the basic elements that make up atoms,” Matthew said excitedly. “That’s always been the goal of physics, to discover the underlying theory that controls everything in the universe.”

Until Matthew uncovers the “theory of everything,” he’s enjoying his experiences in the Table Rock campus chemistry lab with Rex and his fellow classmates.