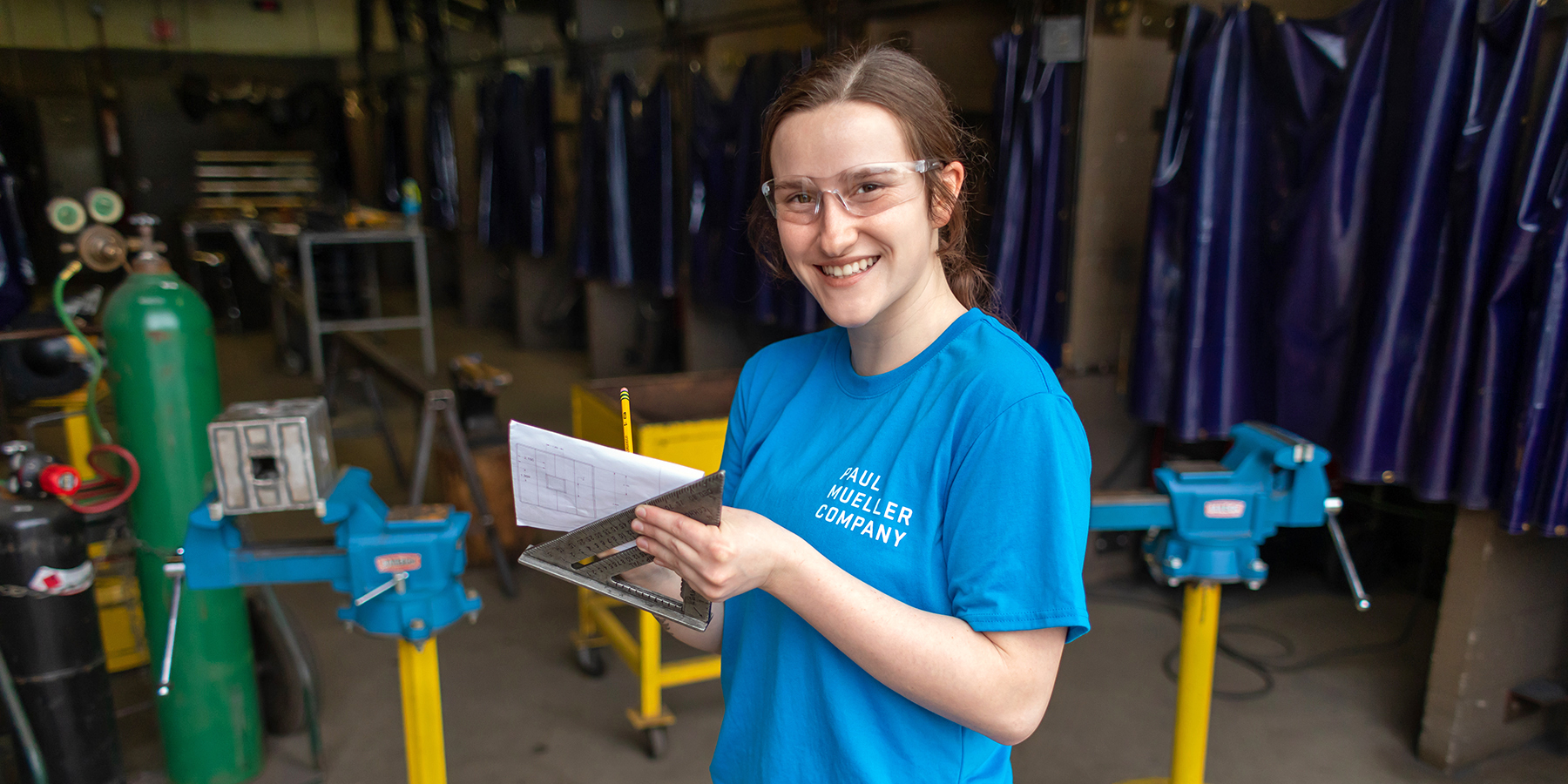 When Sariah Reed picked up a torch and chose to study welding at Ozarks Technical Community College, some of her family members asked her why she wanted to do “man’s work.” But Sariah didn’t see it that way.

“It’s not about being a different gender; it’s about your knowledge and skill in doing the work,” Sariah said.

After completing her degree, Paul Mueller hired Sariah as a fabricator in the fall of 2021. Now, she’s back in the classroom earning a degree in another field where Sariah will be in an underrepresented gender. Eighty percent of drafting and design professionals are men, but thanks to Sariah’s desire to pursue a non-traditional career, she is OTC’s latest Breaking Traditions Award winner.

“It was very cool to have that little spark of importance and find out that someone is proud of me for doing this kind of work,” she said.

Growing up, Sariah split time between her mom’s house in Ozark and her father’s house out in the country near Verona. In Ozark, where she attended school, she was a city kid, but when she visited her dad, she experienced country living.

“At my dad’s house, I had to work in the garden and do chores around the farm,” Sariah said. “But it was also fun. I learned to ride four-wheelers, fish and shoot guns.”

When it was time for college, Sariah started at Missouri State University in the pre-physical therapy program; she joined a sorority and had fun.

“Too much fun,” Sariah concedes.

With poor grades after her first year, Sariah lost her MSU scholarships and decided to use her state A+ scholarship to attend OTC tuition-free. Her initial plan was to improve her grades and head back to MSU, but she recalled a short stint of welding instruction in high school and an instructor who encouraged her to pursue welding in college.

“It was very intimidating walking into the shop,” she said. “My only ‘manly’ experience was visiting my dad’s farm.”

Armed with the work ethic she acquired on her dad’s farm and an intellect that earned her a 4.2-grade point average in high school, Sariah excelled at welding and was hired full-time at Paul Mueller in the fall of 2021. Sariah fabricates tanks for the dairy industry. Driven and ambitious, Sariah plans to become a designer at Paul Mueller; that’s why she came back to OTC for a drafting and design degree.

“Sariah is one of a few women in our drafting courses, but it doesn’t seem to faze her,” said Rene Wade, drafting and design department chair. “She excelled in the welding program, and judging by her success in drafting; she will overcome any obstacles with flying colors.”

When she completes her drafting and design studies and eventually moves up to become a designer, Sariah says she’ll continue welding in her free time.

“It’s very therapeutic. I just put my hood down, and I can’t see or hear anything,” she said. “I’m a perfectionist, and I just try to be as perfect as possible.”

By excelling at “man’s work,” Sariah earned a $2,000 Breaking Traditions scholarship for the next school year.