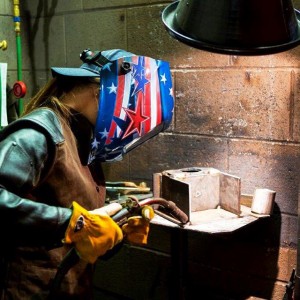 Brie Jenkins has never shied away from competing against the best when it comes to displaying her skills as a welder.

The OTC student earned a job as a machine shop welder at the Paul Mueller Co. by being a standout student. Then, she wowed a lot of experienced welders by finishing second in the American Welding Society’s Oktoberfest held in Springfield.

Brie will take her skills to another stage when she competes in the state SkillsUSA competition March 26-27 at State Technical College of Missouri in Linn. If she wins there, she will move on to the national competition in Louisville, Ky.

“I like welding because it lets me work with my hands. It’s a skill that I’ve learned and I know that I will always have,” said Brie, who grew up in Pittsburg, Mo., with five sisters and three brothers.

She spent a lot of time there watching her father and grandfather weld at the custom structural steel company they operated.

This was the first year that Brie will compete on an individual level at the state Skills event. She appears to have a good chance having gotten to talk with Jason Bills, who won state as an OTC student last year and is now a welding instructor at OTC.

“We’ve talked several times. We talked about paying attention to the blueprints and drawings,” she said.

This will be the only year Brie competes as a welder. She will graduate in May with degrees in welding technology and drafting and design and took a jog at Mueller in December in as an engineering design technician. There’s no welding required.

“I’m going to miss it. The instructors had a big influence on my education and career,” she said. “I would recommend welding for women or anyone who likes to work with their hands.”

While she is graduating with two degrees, Brie continues to have a love for the farm and horses, which she likes to train.

“I know I’ll have the degrees, but I want to own my own land and cattle,” she said.