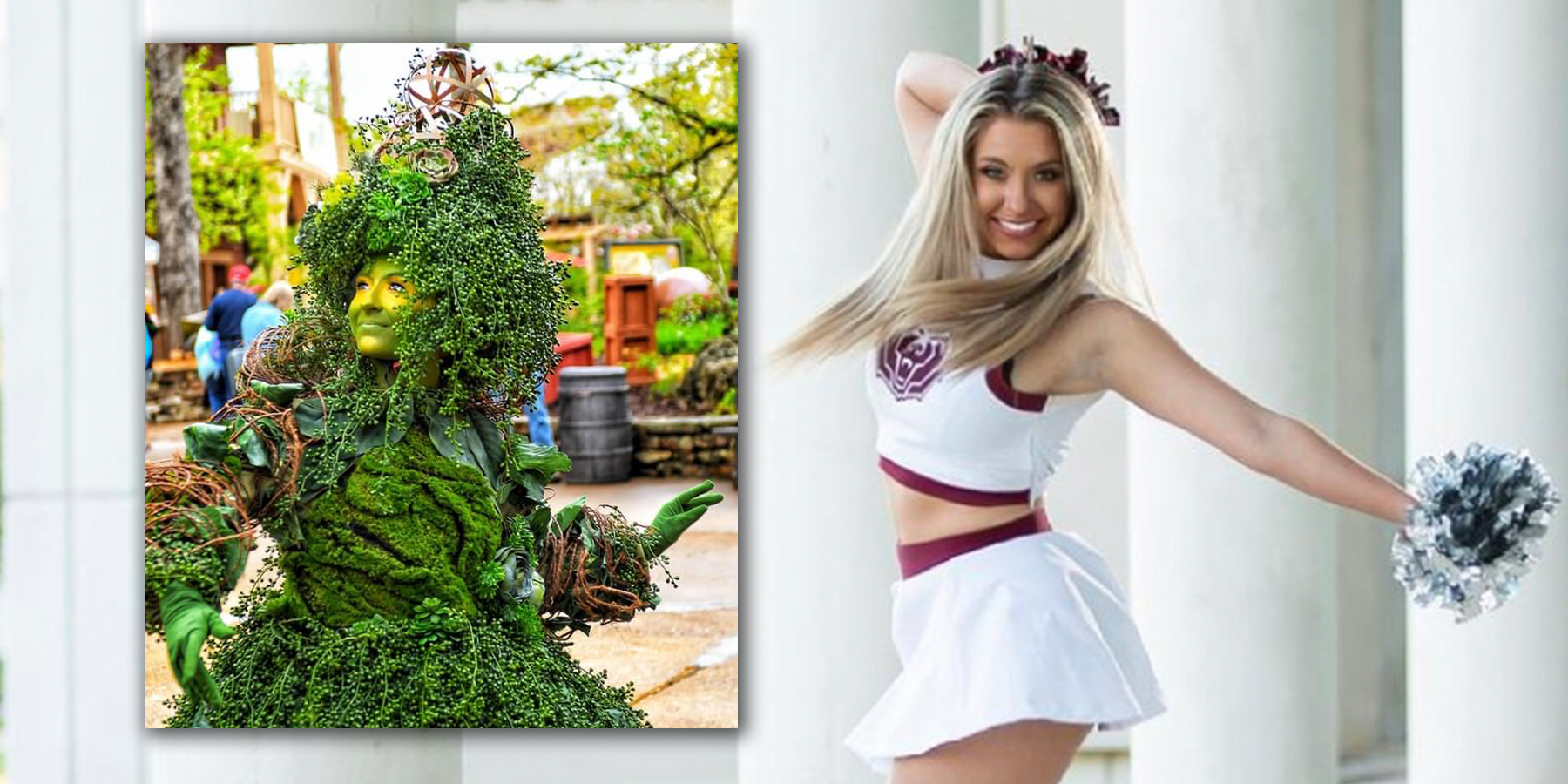 Her bubbly attributes are apparent as soon as she speaks. Energy, positivity and gratitude infuse her conversation.

“I was homeschooled most of my life, but I’m a really social person. So, I started a Kickapoo halfway through my sophomore year,” Audri said. “I was like, ‘This is a dream come true. I loved every minute of it.'”

The busy part is evident when Audri, 20, details her schedule of full-time coursework, teaching dance, choreography, and she’s a performer at Silver Dollar City in Branson.

“This February, I got a call that said, ‘We are starting the Living Garden, and you’re going to be a singing, dancing bush,'” Audri recalled with a laugh. “I said, ‘Great. I love it. Sounds good.'”

For the entire month of April, Audri played her shrubbery role Thursday-Sunday for 20 minutes every hour. Besides her costume, Audri had to color her hair green, and green makeup covered any exposed skin.

“Yes, even the inside of my ears. I’ll be finding green makeup in my ears for months,” she said.

Audri’s path to playing an anthropomorphic shrub began at 12 when she took dance lessons at a Springfield studio. Audri trained in traditional disciplines such as jazz, tap and ballet and performed competitively. At Kickapoo, she was coming off of an injury and did not make the dance team, but she was the cheerleading squad captain her senior year. After high school, Audri enrolled at Missouri State University, where she was a member of the Diamond Girls dance team and the squad’s choreographer.

Audri had taken a few OTC classes in addition to MSU courses during her first year of college, but as her schedule became even more packed, she was looking for a college option closer to her south Springfield home.

“I found the Richwood Valley campus. I said to myself, ‘Oh my gosh, this campus is beautiful,'” Audri said. “It’s only 10 minutes away, and the classes fit perfectly into my schedule.”

Before she played a bush at Silver Dollar City, Audri received word that SDC needed her to be the “swing” for the amusement park’s “A Christmas Carol” production last winter. Audri was everyone’s understudy, and she had to learn all the dances. If a leading performer were sick or injured, Audri would step in. Audri was at daily rehearsals and discovered what it was like to work on a professional production.

As long as dancing works out, Audri would love to be a backup dancer for a pop singer or perform on a cruise ship. However, before she can consider those careers, she has another gig lined up at SDC, dance classes to teach, choreography to design and OTC classes to take.”I’m really happy that I said yes to all the things this year. Most people are like, ‘Why would you do that to yourself? You have no time just to enjoy life,'” Audri said. “I do enjoy life. This is probably the best year I’ve ever lived.”