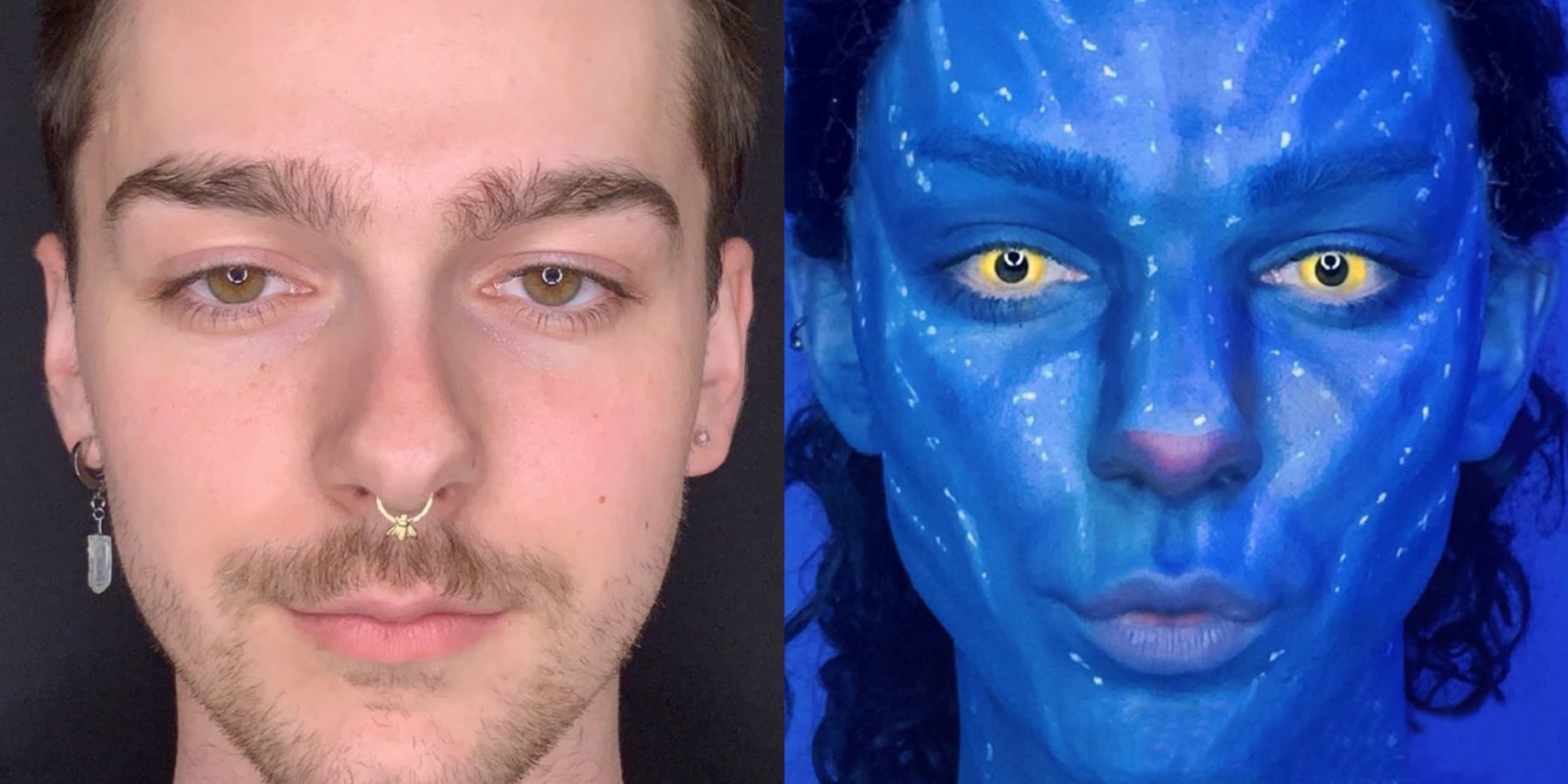 The TikTok video starts with a closeup on the face of a young 20-something, then a makeup brush tickles the lens obscuring the brush’s holder. The brush retreats, and we see the 20-something again, and the brush flicks the lens again, filling the frame. However, when the makeup brush pulls back, the young person on-camera has been transformed into one of the blue aliens from the film “Avatar” with all of the details of a Hollywood makeup artist. Like the makeup work, the change is dramatic.

The person on-camera is OTC student Preston Schaeffer, and he’s the makeup artist who made himself look like a blue “Avatar” alien. Preston works at a Springfield salon as a makeup artist, helping people look their absolute best for weddings, proms, and photo shoots. The 23-year-old uses TikTok to showcase his talents, and he’s been successful on the social media platform. Currently, Preston has 288,000 followers on TikTok, and his videos have nearly 11 million views. That kind of following doesn’t just happen. Preston works hard.

What upsets commenters enough to send him death threats? He’s a male makeup artist, and he is an LGBTQ+ activist.

“Social media has allowed me to become a voice for people who don’t have a voice,” Preston said.

While Preston has to endure vile comments and the unease of threats, his social media presence has received some positive attention. In 2021, Preston appeared in a documentary film called “I am Gen Z.”

Here is a description of the film from the United Nations Association Film Festival, “Through expert interviews and the web lens of Generation Z, the documentary explores how the digital revolution is impacting our society, our brains and mental health, how the forces driving it are working against humanity and have put us on a dangerous trajectory that has huge ramifications for this first generation growing up with mobile digital technology.”

“I am Gen Z” was featured at the 2021 UN Film Festival in Palo Alto, Calif., and Preston represented the film at the screening in October 2021.

Ozarks Technical Community College will show “I am Gen Z” at 4 p.m. on Tuesday, March 8 in Lincoln Hall, Room 211. Following the screening, there will be a panel discussion about the issues the film raises. The panel will include OTC students, faculty and administrators. The screening is free.

One of the videos of Preston used in the film is his response to a video re-enacting the 2016 Orlando Pulse Nightclub shooting, which killed 49 people and targeted LGBTQ+ people. His video, which received 4.6 million views, said, “He is glorifying shooting somebody who is part of LGBT, which is gross in itself, but then I looked at the comments… And to the people that think this is ok, we’re stronger than you. The more that you do this, the more that we stand in unity.”

“One of the film’s themes is how social media and online culture have become a megaphone for hate speech. I spent several hours a day on TikTok searching for videos linked to that theme. Once I found Preston’s clip, our research team asked him if we could use it in the film. I was delighted when he said ‘yes,'” said Liz Smith, “I am Gen Z” director. “I look forward to continuing our collaboration into 2022 and beyond. I consider Preston to be a good friend of mine now, and for me, this is a really lovely outcome of making the film.”

The film features other Generation Z voices (People born between the late 1990s and the early 2010s are generally considered Generation Z) and former executives from high-tech companies like Pinterest, psychologists and scholars. The movie’s message? Social media can be terrible for everyone, especially young people. Preston agrees.

“I 100 percent think it’s awful for my generation,” Preston said. “If I didn’t have a platform and a voice, I’d delete it in a heartbeat.”

Preston is a successful makeup artist, and he does not need the exposure to grow his client list. His ability to promote LGBTQ+ issues and counter the hatred he has experienced online keeps him going.

“I hope people leave the film with the idea that they can be the change they want to see in the world,” Preston said. “You’ll be surprised by how much positivity will come back to you from being the change.”