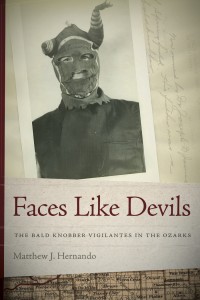 Matthew Hernando remembers the first time he came across a group called the Bald Knobbers.

“I rode ‘Fire in the Hole’ at Silver Dollar City and read ‘The Shepherd of the Hills,’” said Hernando, an instructor at the OTC Table Rock Campus.

From there, his interest in the Ozarks vigilante group grew and, when he became a history instructor, the Bald Knobbers became the subject of his doctoratal dissertation. Now, it has become a just-released book entitled: “Faces Like Devils: The Bald Knobber Vigilantes in the Ozarks.

“The book is a revised version of my dissertation,” said Hernando, who teaches history and government at the Table Rock campus. “About 2 ½ years of research and writing went into the dissertation and another year, off-and-on, of revising it and getting it ready as a book manuscript.”

According to Lyn Smith, marketing associating for the University of Missouri Press, which published the book: “Despite being one of America’s largest and most famous vigilante groups during the nineteenth century, the Bald Knobbers have not previously been examined in depth.

“Hernando’s exhaustive research, which includes a plethora of state and federal court records, newspaper articles, and firsthand accounts, remedies that lack. This account of the Bald Knobbers is vital to anyone not wanting to miss out on a major part of Missouri’s history.”

Hernando modestly admits that he is probably the country’s leading expert on the Bald Knobbers.

“There have been several other books written about them years ago and there have been fictionalized versions. Mine is more extensively researched. I tried to focus on more than just the narration but why it happened, as well,” he said.

Hernando said there were two groups of Bald Knobbers who roamed the Ozarks with two different purposes.

The Taney County faction was made up of the upper rung of residents who were more concerned with fighting violence and crime. They wanted to build up the area for investment and immigration.

The group from Douglas and Christian counties were from “the humble strata of society.” This group was more concerned with cracking down on moral violations, adulterers, drunkards and those who abused children, Hernando said.

“They were trying to impose a moral code on residents,” he said.

Hernando is pleased with the book and might be consider writing another one in the future, but he has no definite plans.

“I have always been interested in the history of this area,” he said.

Take a trip to Macchu Picchu next summer
November 19, 2019