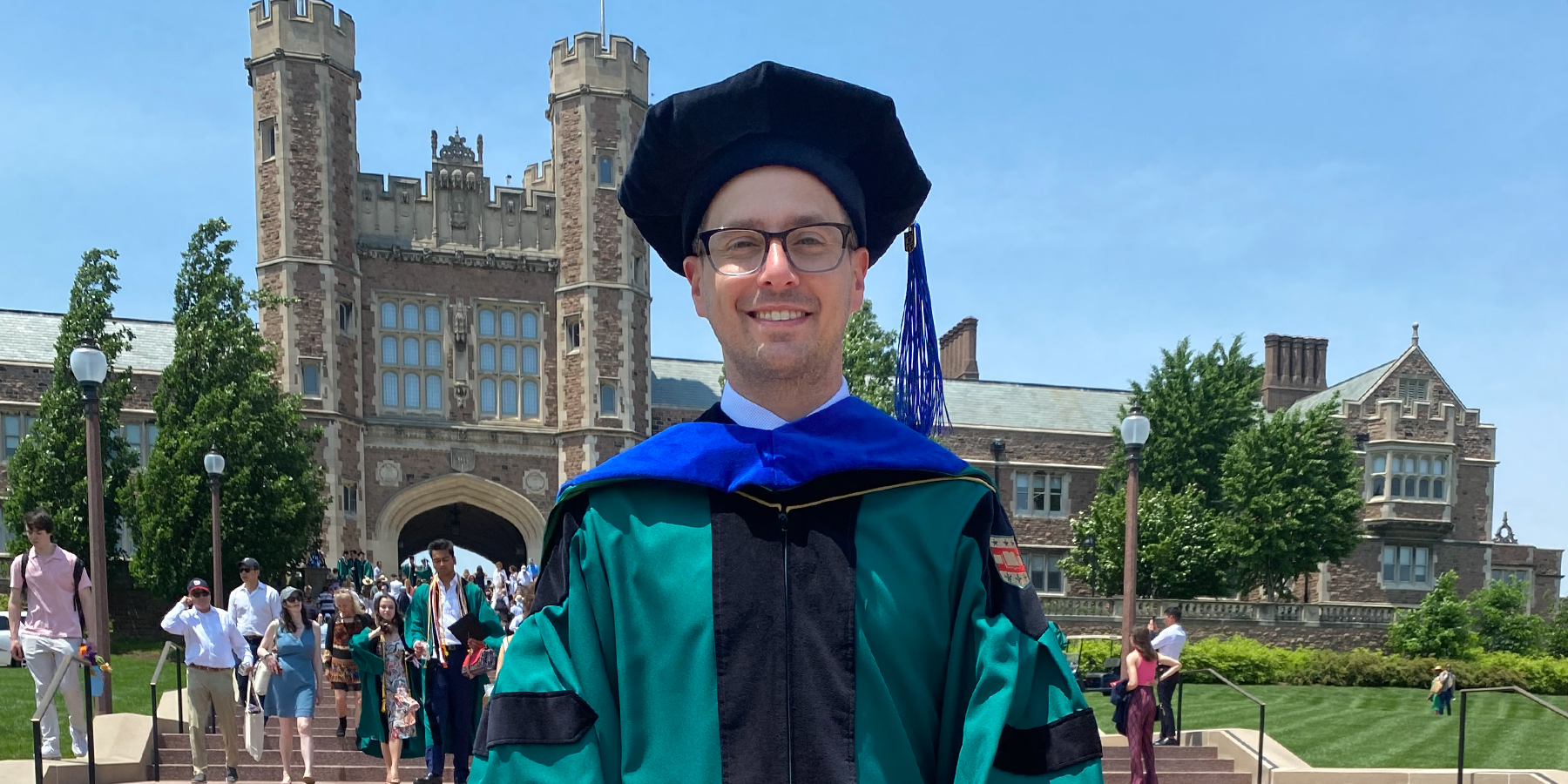 Like most Ozarks Technical Community College students, Andrew Foell was a first-generation college student. No one in his immediate or extended family graduated from college. And before attending OTC, Andrew’s knowledge of the state’s colleges and universities was pretty limited.

“I knew Mizzou was in Columbia, and I knew about Missouri State because of (former Lady Bears basketball great) Jackie Stiles,” Andrew laughed. “I didn’t know anything about Washington University in St. Louis.”

Now, Andrew is extremely familiar with Washington University, better known as WashU. This past May, Andrew graduated with his Ph.D. in Social Work. Recently, he began his academic career as an assistant professor of social work at the University of Illinois-Chicago.

Growing up in Lebanon, Andrew knew he wanted to attend college, but he wasn’t sure how to make that happen. After graduating from Lebanon High School in 2006, Andrew took advantage of the state’s A+ scholarship and attended OTC in Springfield tuition-free.

“OTC was close to home. I could spend time with family and have my social support system intact,” Andrew said.

Andrew wasn’t familiar with the social work profession until spring break of his first year at OTC when Andrew and a friend went to volunteer with a not-for-profit helping families in public housing. The work was not glamorous — sorting donations, working the food pantry and delivering furniture, but he noted something about the people who worked at the non-profit.

“They almost all had degrees in social work,” Andrew said.

When he returned from that spring break trip, Andrew knew what he wanted to study for his bachelor’s degree. He began taking psychology, anthropology and humanities classes to prepare to transfer into the social work program at Missouri State University.

“OTC prepared me so well to transfer to a 4-year college and concentrate solely on my social work program at MSU. OTC challenged me academically and provided me with opportunities to explore my interests. I am forever grateful for my experiences at OTC,” Andrew said.

Later, while pursuing his social work master’s degree at the University of Minnesota, Andrew decided he wanted a career in academia where he could engage in research to determine what policies and practices were most effective at helping the people social work initiatives are designed to assist. He was attracted to Washington University in St. Louis because it was just a few hours from Lebanon and ranked as one of the top social work graduate programs in the country.

“When I learned that I’d been accepted, I was just speechless,” he said. “Not only was WashU a top-ranked school, but it was also close to family.”

While applying for his doctoral program and academic jobs, Andrew asked colleagues and mentors to review his résumé and other application materials. He was often encouraged to remove OTC from his list of educational institutions because, having more advanced degrees, his first two years of undergraduate education likely wouldn’t affect his applications. But Andrew always kept the OTC entry.

“I left it on there because I thought another first-generation or community college student might run across my résumé online and be inspired and realize that they could pursue a doctoral degree too,” he said.

While at WashU, Andrew was a program ambassador for the social work doctoral program. Potential students could email him or call him with questions. One day, he received an email from an applicant who appreciated that he had a community college on his resume because the applicant had also attended a community college.

Now, the 35-year-old is preparing to begin his first semester as an assistant professor of social work at the Jane Addams College of Social Work at the University of Illinois-Chicago. Andrew is honored to join UIC at a school named after one of the founders of the social work profession. At UIC, Andrew will continue researching programs and policies that assist children and families in public housing.

“My parents are very proud. They joke that they don’t understand where I got my enthusiasm for education,” Andrew laughed. “They have always been so supportive and encouraged me to pursue my passions.”

They share DNA and a college — the story of the Kings’ reign at OTC
September 9, 2022