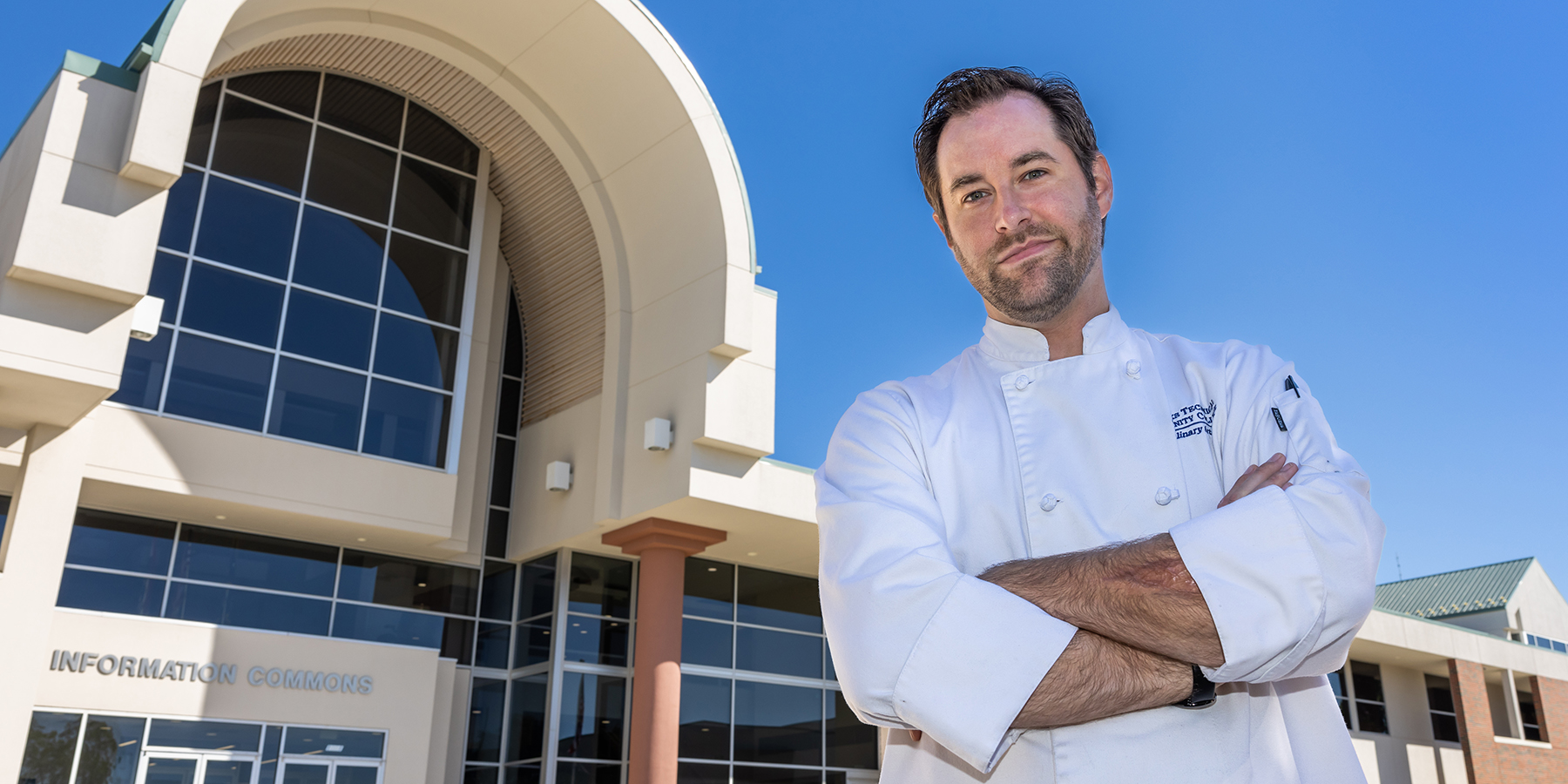 Tyler Kahler was a first responder in California before moving to Missouri, attending OTC and pursuing a career as a chef. After a horrific car crash, the former paramedic was on the receiving end of help – from his college.

Ozarks Technical Community College graduate Tyler Kahler is a big fan of the late chef, author and television host Anthony Bourdain. Tyler and Bourdain have a lot in common. They both have a passion for preparing good food. They’re also both storytellers. But while Bourdain’s stories involve food, drink and good company, Tyler’s tales come from his days as a California paramedic.

One such story involves a search for a missing vehicle passenger from a train-car collision and his paramedic partner saying, “If that thing starts blinking at us, I’m running.”

Tyler’s “train story” details are too gruesome to share, but he concedes, “Unfortunately, that’s not the wildest story.”

Tyler was an off-duty Bakersfield, Calif. paramedic on October 1, 2017, when he attended the Route 91 Harvest music festival in Las Vegas.

“The sound of gunfire is pretty easy for me to pick up on,” Tyler said. “I knew the shots weren’t fireworks.”

The gunfire Tyler heard was the more than 1,000 shots fired by a gunman on the 32nd floor of the Mandalay Bay Hotel. The infamous shooting killed 60 people and wounded 413.

“When I got to the main entrance, people were injured just from trying to get out,” Tyler said. “One woman sliced her leg open, climbing over a chain link fence. She took my belt that night in the form of a tourniquet.”

The shooting started around 10 p.m. Sunday, and Tyler made his way back to the hotel at around 3:30 a.m. Monday morning. By Tuesday, Tyler was back at work in Bakersfield on Tuesday. On his return to work, Tyler was on an ambulance crew headed back to Vegas to pick up a Bakersfield police officer shot while attending the music festival on Sunday. When Tyler and the other paramedics went to pick up the police officer, Tyler knew him.

“On Sunday night, he had been shot in the hip. I was trying to shove him into an Uber to get him to the hospital, and he kept saying, ‘I’m a cop. I can help.’ I thought, ‘You are going to bleed to death,'” Tyler said. “I didn’t realize it was the same guy until we went to pick him up. I rode in the back of the ambulance with him back to Bakersfield.”

Tyler always thought he’d eventually go to medical school and become a doctor, but after his divorce, he decided it was a good time to make a change. Like Anthony Bourdain, Tyler planned to attend the Culinary Institute of America in New York. However, on a trip to visit his father, who had retired to southwest Missouri, his dad told him to check out OTC. By January 2020, Tyler was enrolled in OTC’s culinary program.

Since he already had some college credits, Tyler progressed through the program quickly. He was attending college full time, working as a culinary assistant at the college and bartending. In December 2021, about a week shy of the end of the semester and his graduation, “I decided to see how many somersaults my car could do,” Tyler joked. “The answer is two, and then you get caught in a tree.”

Among his injuries, Tyler was seriously hurt with significant blood loss, broken ribs, a broken arm, and a skull fracture. Tyler spent eight days in the hospital and required a complete repair of his triceps, a new arterial system in his arm and a skin graft. Tyler was out of work, and his employment choices were limited while rehabilitating his body. A few months after his accident, Tyler stopped by the college. He knew Vicki MacDonald, the director of student engagement, because she also taught a bartending and beverage class for OTC. 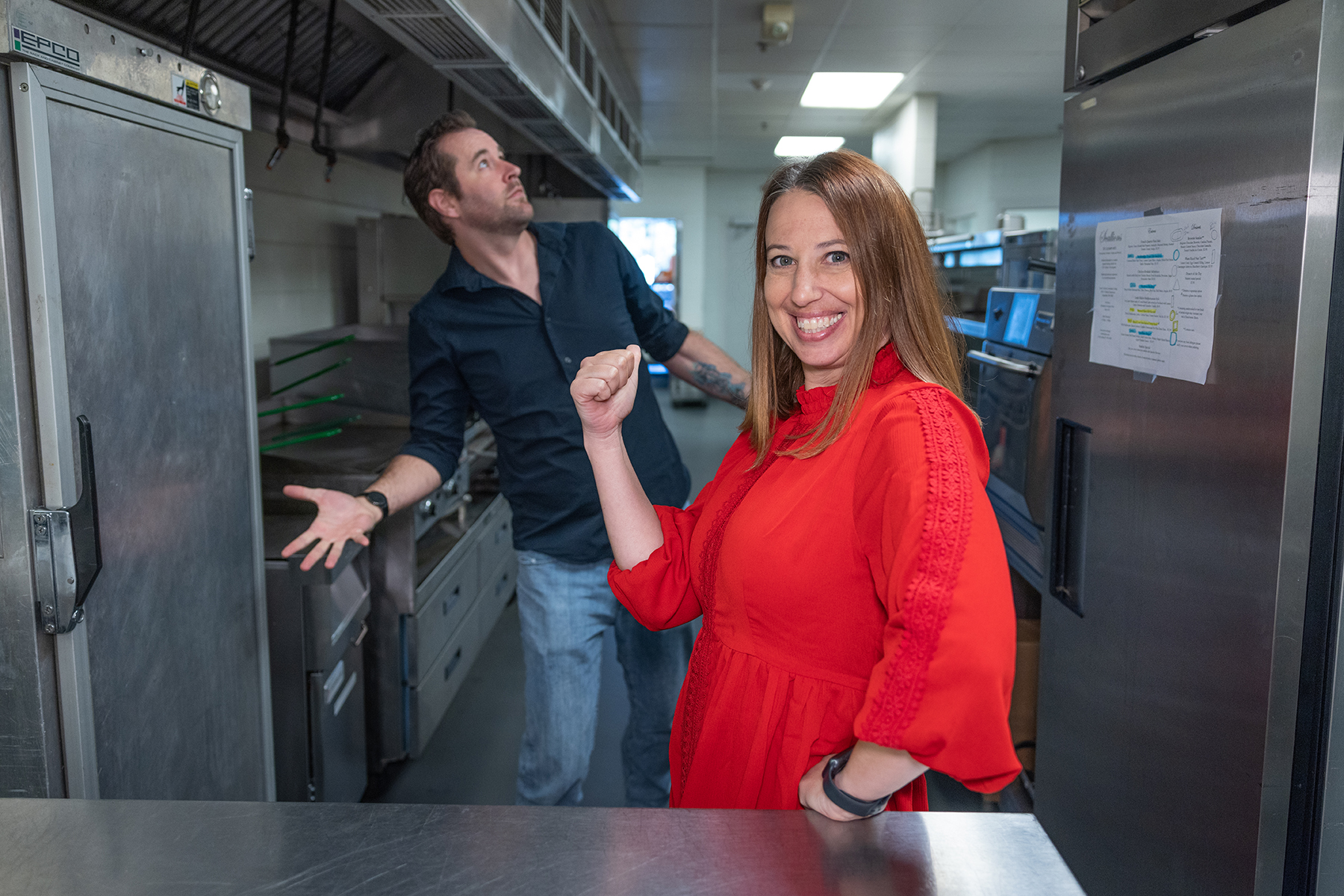 “Tyler couldn’t use his left arm, so he couldn’t work in the culinary field,” Vicki said. “I told him I would hire him as an ambassador. He was great. The other ambassadors really looked up to him.”

Tyler worked as a student ambassador through the end of the spring semester. Now recovered, Tyler has been a line cook at Retro Metro restaurant in Springfield since July. Two of the original employees of the popular Metropolitan Grill own Retro Metro, and they serve some of the restaurant’s original menu items.

While cooking is a far cry from Tyler’s days as a paramedic, he still draws on that experience in his new line of work.

“As a paramedic, I’d check my rig when I showed up for work. Also, you have to manage your time. Do things of the highest importance first,” Tyler said. “Now, when I come into the restaurant, I check my station and do my vegetable prep. I focus on the most important tasks when we’re slammed in the kitchen.”

Tyler isn’t sure if he’ll stay in the Ozarks forever or if he’ll go off on another adventure. Either way, the 36-year-old says his decision to attend OTC was a good one.

“The campus, facilities and equipment were all excellent,” Tyler said. “I never met an employee I didn’t like. I couldn’t have had a better experience.”