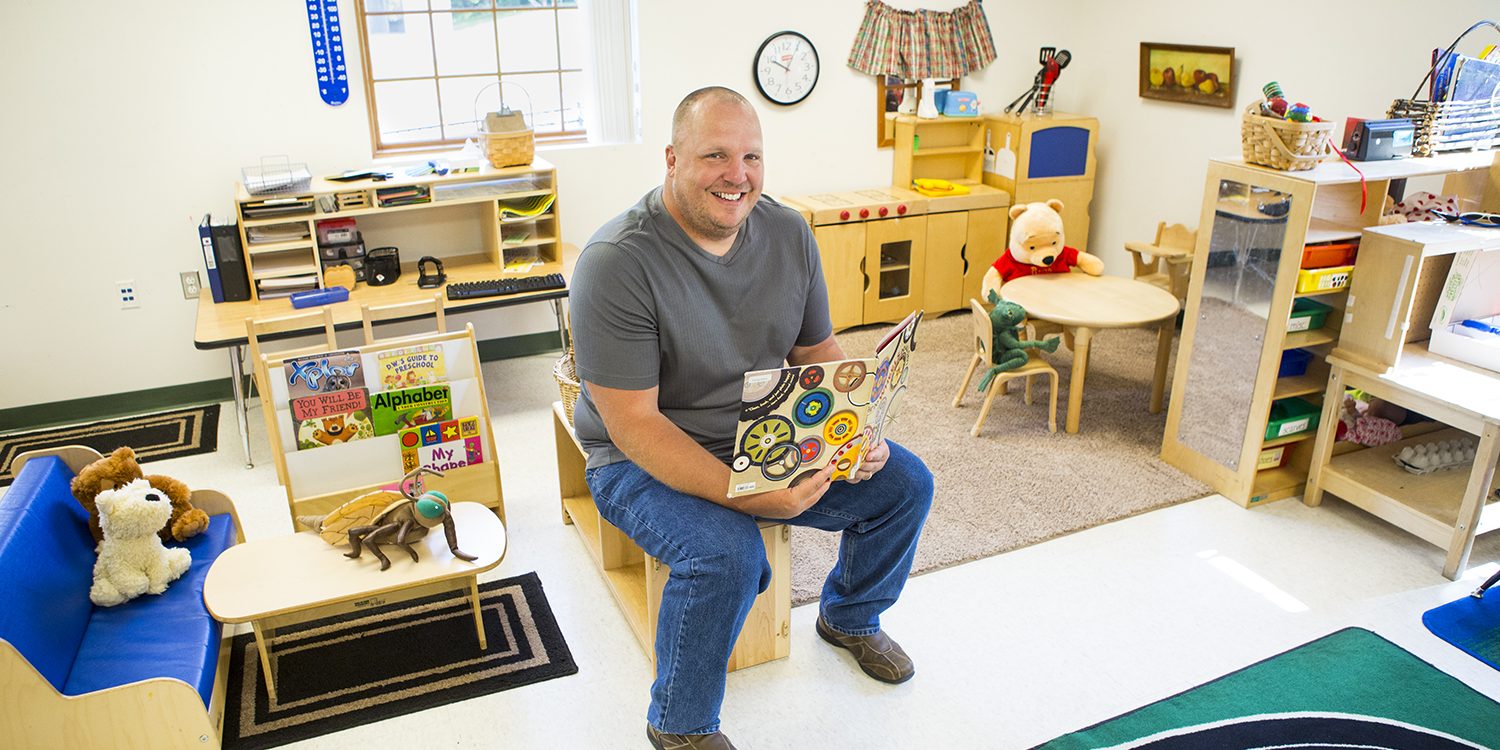 Standing at 6-feet-5-inches tall, retired U.S. Navy veteran Jason Wilson towers above the preschoolers in his Early Childhood practicum class. But the kids don’t find Jason intimidating. In fact, they think he’s much more fun to climb than their outdoor playground equipment.

“They always run to me when they see I’m in the classroom,” Jason said with a grin. “They’ll climb on me, we’ll play basketball together – they never want to leave my side.”

Jason always knew he would study Early Childhood Development once he retired from the U.S. Navy. He said a particular deployment to Guatemala – where he and fellow sailors helped rebuild impoverished schools – further cemented his plan.

“It’s easy to take our educational systems in the U.S. for granted,” Jason explained. “In Guatemala, schools are only publicly funded until the fifth or sixth grade. We would often see 600 students crammed into small buildings without windows or air conditioning – it felt good to build better learning environments for them.”

Toward the end of his 20-year military career, Jason became a recruiter for the Navy. He said that working directly with kids and young adults affirmed his decision to pursue an Early Childhood career.

“I want to be that teacher who helps the kids who are struggling in class,” Jason said. “Some don’t learn as fast as others. And if we can help them when they’re young – make school fun and interesting for them – we can change lives.”

When it came time to go back to school for his degree, Jason said he chose to attend OTC because of its reputation.

“I don’t do well in large groups, and I don’t like big lecture halls,” he explained. “The smaller classes, the hands-on learning – that’s the type of education I was looking for.”

Jason said his transition from sailor to student was fairly easy. He credits much of his success to his supportive wife, Kim, and their children, McGuire and Reese. In addition to his family, Jason touted the support he had received from his instructors in the Early Childhood program.

“Throughout my entire career at OTC, my instructors have always made time for me,” he said. “They are here for all of their students. They go above and beyond, and they want you to succeed. And that was really important for me, especially as I transitioned from being in the military to being a nontraditional student in college.”

Jason will graduate with his Early Childhood Development degree in December of 2017. He plans to transfer to MSU to pursue his bachelor’s degree. He wants to be a first or second grade teacher, but he also plans to work toward a master’s degree in counseling.

“Everyone should have access to a good education,” Jason said. “And I’m here to do it right. If I can change just one child’s life – that will make everything I’m working for worth it.”