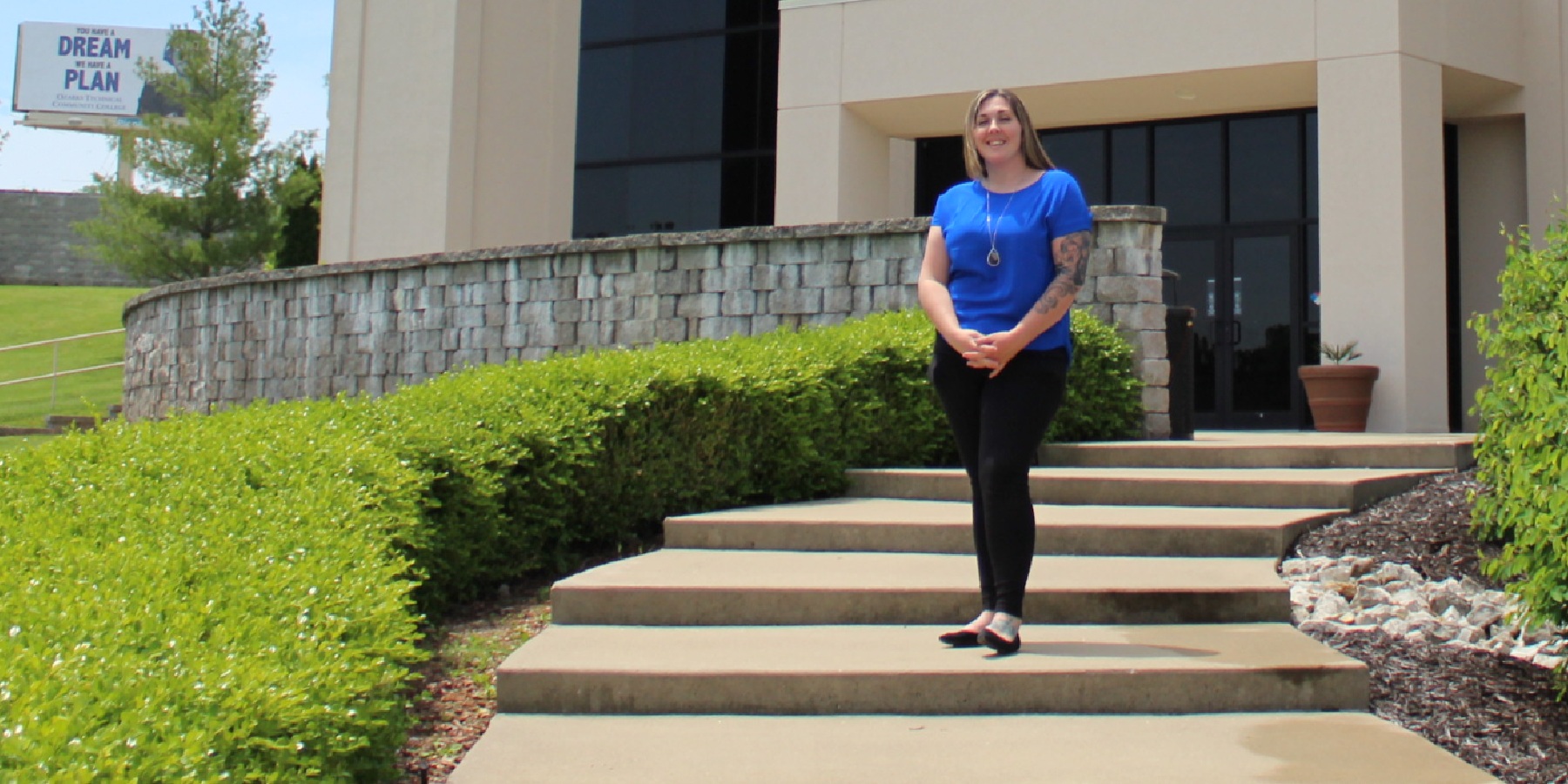 In the Jane’s Addiction song “Jane Says,” the song’s protagonist, Jane, utters the words, “I’m gonna kick tomorrow.” She’s saying she’ll “kick” her addiction tomorrow, but when the next day comes, she utters the same mantra — tomorrow is always the next day. For soon-to-be OTC graduate Liz Atchley, tomorrow came on August 17, 2016. That’s the day she got sober, the “tomorrow” when she decided to turn her life around was January 20, 2017.

“I was staying at a sober living program in Branson, and I went to flip the page on a quote-of-the-day calendar,” Liz recalls. “The quote said, ‘If you ever forget what joy looks like, watch a child blowing bubbles for the first time.'”

January 20 was also Liz’s son’s birthday. Due to her addiction, Liz had lost custody of her little boy, but that quote inspired her.

“It hit me right at that moment that I needed to turn my life around and get out of my own way,” Liz said.

Consider that goal accomplished. Five-and-a-half years later, Liz is about to graduate from the Behavioral Health Support program and start a career with Burrell Behavioral Health, she’s married, and she has custody of Jayden.

Like many addicts, Liz’s childhood was checkered with chaos, addiction and trauma. Born in the Ozarks, Liz, her mother, and younger sister moved to Mississippi when Liz was six. When Hurricane Katrina blew through in 2005, her family returned to Ozark when Liz was 13. At that point, Liz’s mother enrolled at OTC, earned a criminal justice degree and began a new career. However, Liz did not learn from her mom’s hardships.

“Even though I had seen all of these horrible decisions being made around me, all my childhood, I chose to follow the hard, rocky, horrible road that is a life of addiction,” Liz said. “I was still in high school, and I was using methamphetamine and smoking marijuana.”

After Jayden was born, Liz got clean, “I was doing everything that I needed to do to be a mom,” she said.

But domestic violence and a toxic relationship drove Liz back to the drugs. That’s when she lost custody of her son. Liz was using methamphetamine and heroin. Eventually, drug use cost Liz her freedom. She lost most of 2016 to incarceration. First in jail and later in the women’s prison in Vandalia. When she was released from custody, “I had state issue boots and a state issue jacket. That was everything I had in the world.”

Angry at the world and housed in the sober living facility in Branson, Liz ran across that quote about joy and a child blowing bubbles.

“The only way I could hear or talk to my son was through Facebook videos. One of the videos was of Jayden blowing bubbles. I’ll never forget that,” Liz said. “For the next two years, I just did what everybody told me to do, even if I didn’t like it,” Liz said.

She began working at Sonic and at the sober living facility. Plus, she saw a substance abuse counselor who suggested she attend college.

“I said, ‘Yeah, my dad (stepfather) says the same thing,'” Liz recalls. “He said, ‘If two people told you your fly was down, don’t you think you should take a look?'”

Liz started the Behavioral Health Support program at the OTC Table Rock Campus in the fall of 2019. During that time, she was also adjusting to motherhood after regaining custody of her child. Plus, she was married and bought a house. Liz completed the hybrid BHS degree, the courses are primarily online, but students meet in person for one day every two weeks. While the previous decade of Liz’s life was less than ideal, her experience has benefited the program.

“During her practicum experiences, her preceptors said they had learned as much from Liz as she learned from them,” said Deonna Crabtree, BHS practicum coordinator.

BHS Program Director Amy Shelley added, “She’s proactive and networks with local agencies in ways that benefit her classmates and the organizations. Liz works to be the best at any task or role she takes on.”

Poised to begin her new career as a community support specialist with Burrell Behavioral Health, Liz will meet with clients throughout the week, helping them manage their treatment. For years, Liz was the one who needed help with addiction, parenting skills and coping techniques, less than six years since she read the “bubbles” quote, she’s the helper.

“That day after that freaking little calendar said what it said. That prompted me to just not stop. I wanted to maximize every hour of every day to the benefit of growing as a person so I could help other people,” Liz said. “I turned from only worrying about myself to, what can I do to be better for other people?”