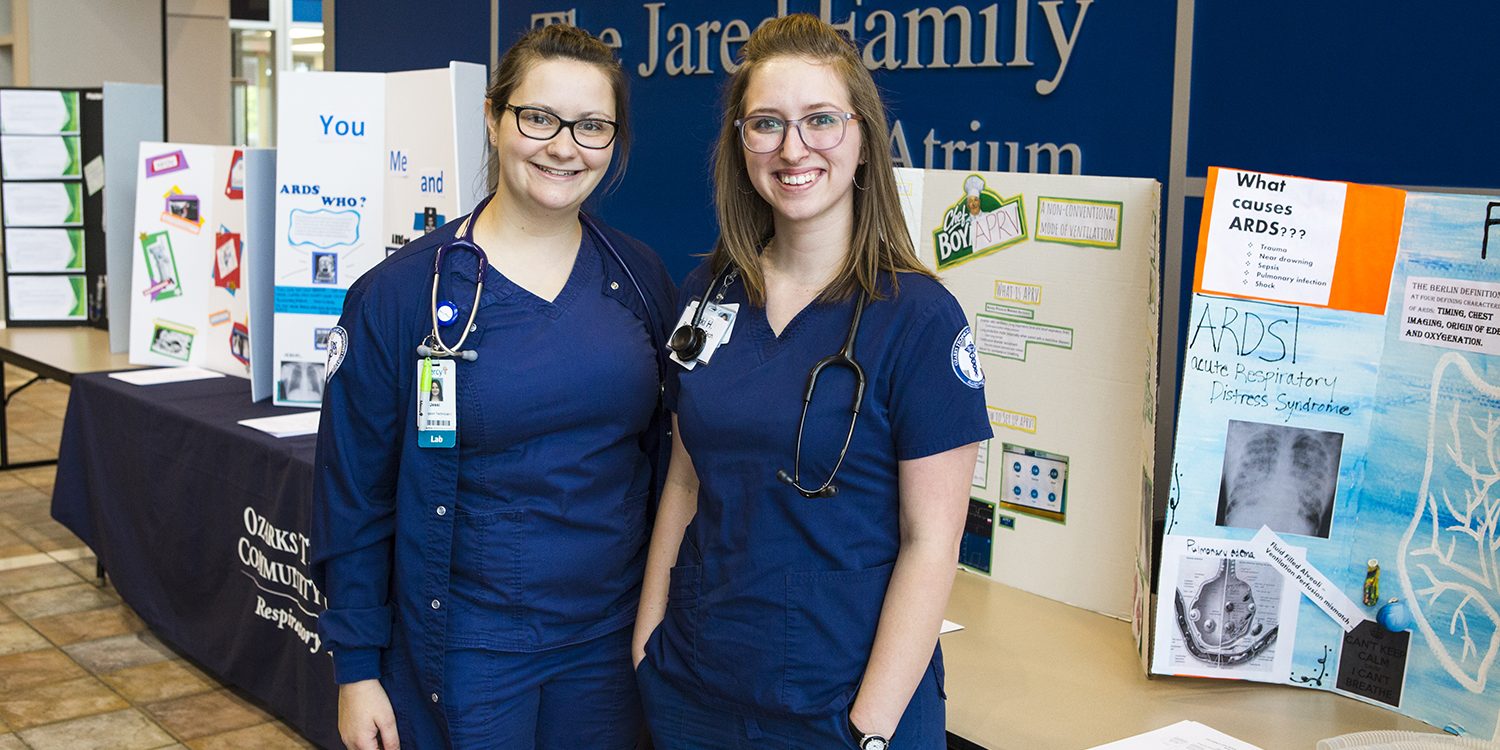 The future looks bright for OTC students like Jessi Thomason and Ricki Hackworth who will begin their careers as respiratory therapists this month. The duo recently earned statewide recognition at the Missouri Society for Respiratory Care conference, held April 19-21 in Osage Beach, Mo.

Jessi, a Mountain View native, was one of four students selected to present at the statewide conference. She gave a presentation on high frequency ventilation in the management of Acute Respiratory Distress Syndrome (ARDS).

“I was thankful for the opportunity to present, and I’m really glad I did it, but I’m also really glad it’s over,” Jessi said with a smile. “I was pretty nervous.”

At the same conference, fellow OTC student Ricki Hackworth received the John Rogers Memorial Scholarship. To apply for the scholarship, Ricki had to submit a literature review of a new modality in respiratory care. She chose to write about Airway Pressure Release Ventilation (APRV).

“The mode itself is opposite of how we breathe,” Ricki explained. “Instead of fully inhaling and exhaling, the breath is held for an extended period of time, and then quickly released. It’s an alternative method of treatment for patients with acute lung injuries or ARDS.”

Ricki said the most difficult part of writing her paper was citing it properly according to the Respiratory Care Journal.

“I remember texting one of my instructors while I was wrapping up my citations,” she recalled. “I told him this was harder than trying to explain hemodynamics, which basically encompasses everything involved in circulation,” she said.

When both students were asked to reflect on their time at OTC, Jessi said she was originally drawn to the college for its affordability. However, she took an elective cardio pulmonary class and fell in love with the respiratory therapy program.

“From then on, I knew I was going to become a respiratory therapist,” Jessi said.

Ricki joked that she enjoyed breathing, so she decided to major in it.

“In all seriousness though, choosing respiratory therapy was the best decision I’ve ever made,” she said. “OTC’s program is one of the hardest and most rewarding things I’ve ever done in my life.”

And it’s not just Jessi and Ricki who have jobs secured once they graduate, all 11 respiratory therapy program graduates have jobs lined up as well. Aaron Light, program director, says he’s not surprised by this impressive outcome.

“We’ve had a 100 percent placement rate for our respiratory therapy students for the last five years,” he said.

“Stepping out of their comfort zones to present or submit research ─ not a lot of people can do that, and I’m very proud.”