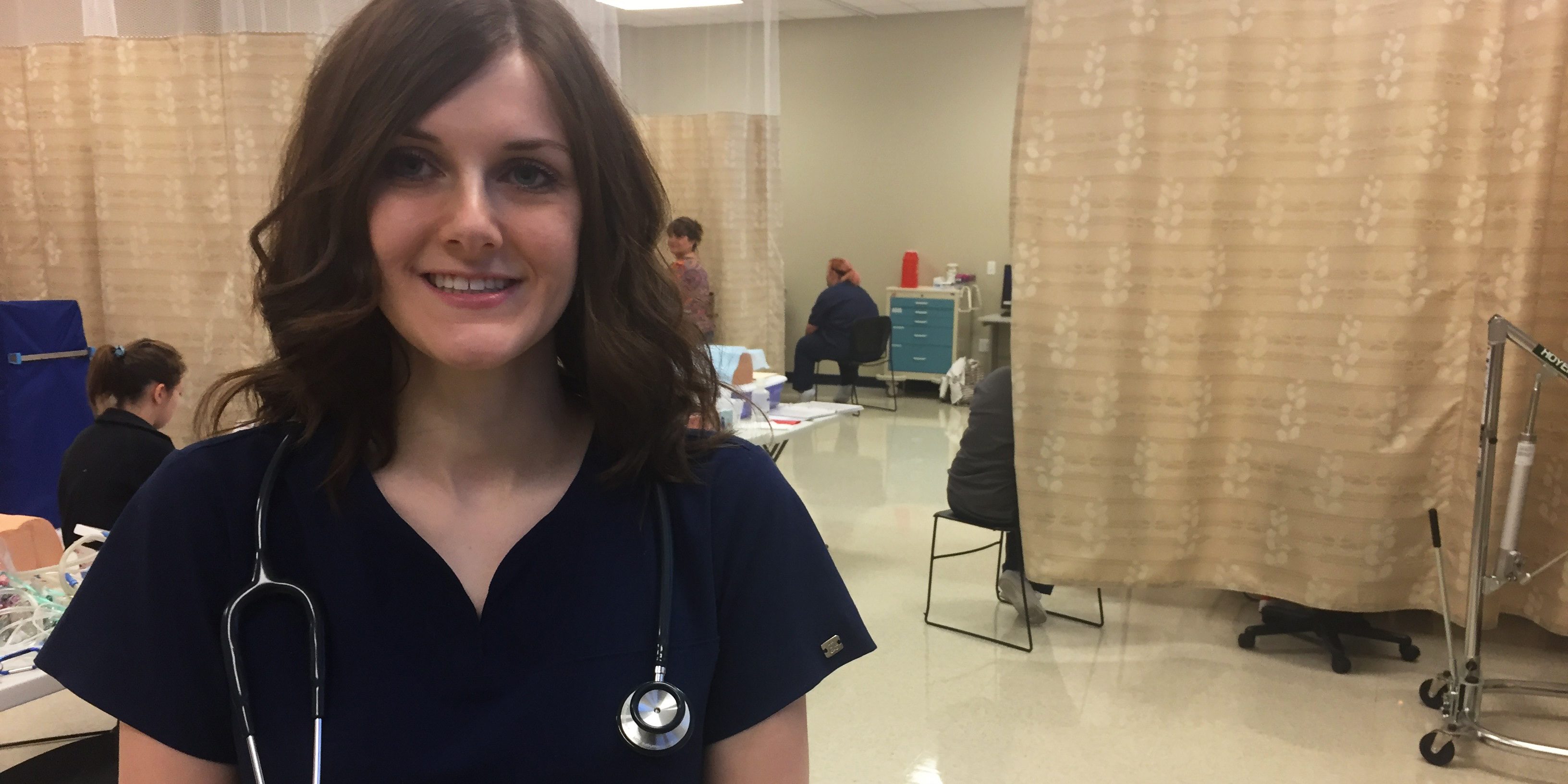 After graduating from Branson High School 10 years ago, Kendra Colson spent a lot of time traveling the country. But it wasn’t until she made the long trip back from Idaho to the Branson area and enrolled at the OTC Table Rock Campus that she found herself and her career.

Kendra received her Associate of Science in Nursing from OTC in October 2015 and since then, she’s worked in the progressive care unit at the CoxHealth Medical Center in Branson.

“I was offered a lot of options with a lot of opportunities to bump my pay,” the 28-year-old said.

Kendra took dual credit courses at OTC while attending Branson High School. She earned some college credits but moved to Texas after she graduated.

A short time later she moved from Texas to Idaho, where her future husband lived and where she attended Brigham Young University-Idaho for a half-semester. Kendra got married, had a child and went to work at a blood plasma donation center.

“At BYU, there was a nursing school there. I earned some prerequisites and then I was going to have to get on a waiting list. The plasma job was not a long-term career for me,” Kendra said.

While living in Idaho, Kendra and her mother, Devon Ellis (who happens to be the secretary for OTC Table Rock Dean Dr. Rob Griffith), had a conversation. Devon offered Kendra’s family her home’s finished basement as a place to live if they wanted to come back to Branson so Kendra could attend OTC.

That was 2013. And everyone’s still living in the same house today, including two more children Kendra has had since coming back, bringing the total to three. “The kids spend a lot of time with grandma,” Kendra said.

Devon said she was surprised when Kendra told her the family was moving back to Branson.

“I just threw it out as an idea. I was ecstatic when they said they were moving. It made me happy.”

Devon’s husband, Kevin, works for Bass Pro Shops and his job requires him to be gone for weeks at a time. Having her daughter’s family in the house is comforting to Devon.

“It’s worked out nice for us. They are in the house Kendra grew up in,” Devon said. “Kendra is a remarkable person. She works very hard. She has three kids ages 6 and under. She works full shifts and is involved in church. I don’t know when she sleeps.”

Recently, OTC Table Rock announced that it would expand its nursing program to offer an Associate of Applied Science in Nursing. The program begins in the fall of 2017 and will graduate 24 new nurses each year who will be eligible to sit for the exam become registered nurses. Kendra’s glad her alma mater is expanding, as those new caregivers will fill a critical need.

“We need it here. There is a real shortage of nurses. Branson is growing and its medical staff need to grow as well. I liked studying at this campus and I think the program will not only draw from areas around here but also areas like Harrison,” Kendra said.