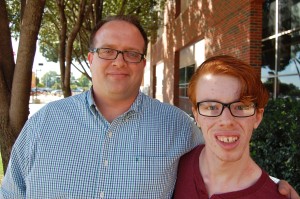 Jason Morgan (left) and Kris MyersKris Myers says he can be himself at OTC. For someone with cerebral palsy, that’s not always easy.

The 18-year-old, first-year student recently spoke at this month’s OTC Board of Trustees about his college career and how students, faculty and staff ­– including Disability Support Services at the OTC Springfield campus  – treat him with respect and dignity.

The left side of Kris’ body is disabled by cerebral palsy, which afflicts the movement of muscles and can produce poor coordination, tremors, as well as stiff or weak muscles. His arm and hand are tucked tight to his side and the fingers on his hand are squeezed together. He walks with a pronounced limp.

“I was astonished how much better it was here than in high school. Here, I was able to be myself,” he told the board. “I never got a chance to be myself before coming here.”

Kris is an Electronic Media Production student with dreams of someday running his own studio.

Kris has been interested in video since he was a child. He used his grandparents’ camera to record family events. He watched a lot of 1990s cartoons, including “Animaniacs,” which Kris liked because it showed what goes on behind the scenes of a studio.

“I’ve always wanted to do this,” he said.

And OTC is the starting point for Kris to follow his dream.

He is taking photojournalism this semester, which can be challenging for Kris, but he’s found ways to compensate for his disability.

“I don’t have good balance. Sometimes, I forget I have a disability and I mess up, but it’s OK. I find a way to do it,” he said. “It hasn’t deterred me from what I wanted to do.”

The two have been friends, and Kris still stops by Morgan’s office to talk and get advice.

“Kris has a quiet resilience that is refreshing to see.  He asks questions if he needs clarity, meets deadlines consistently and has a positive attitude that we can all aspire to achieve,” Morgan said.

Kris is grateful for having Morgan as a mentor.

“I call him about some things. He’s helped me. He’s always been there for me,” he said.

As a result of his character and academic success, Kris was awarded the OTC Career Center Director’s Scholarship.

To Kris, finding work is just another challenge. He has the same attitude about his disability.

“CP people don’t see the disability as a struggle. It’s just extra motivation for us,” he said. “We just have to work hard for our dreams. I recognize that.”