The OTC Rhinos? The college’s first presidents reunite and reminisce 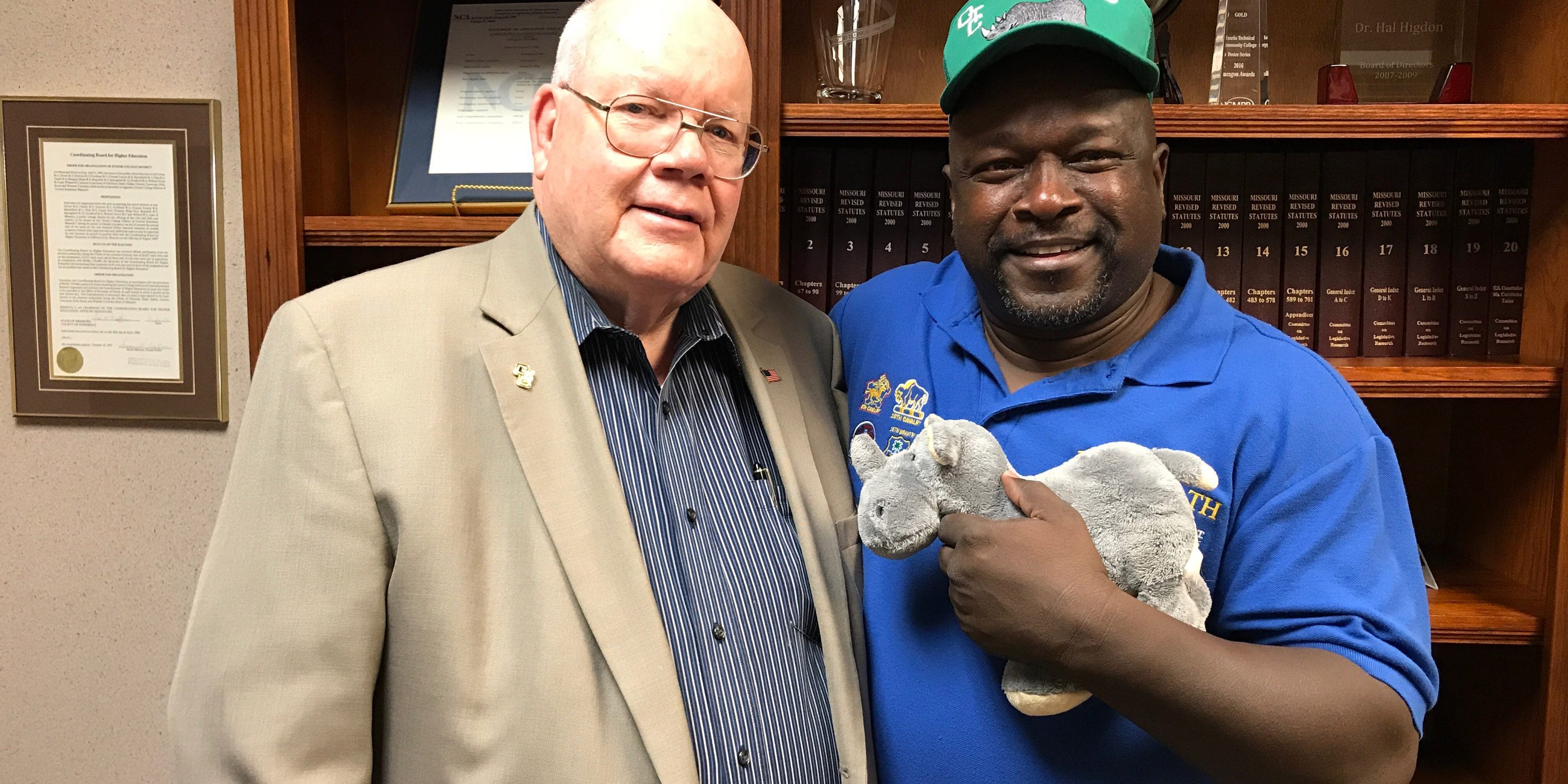 There may not be another OTC alumnus who has lived the “Start Here, Go Anywhere” motto like Wendell Bandy. In fact, OTC President Emeritus Dr. Norman K. Myers says Wendell took that motto a step further.

“Wendell has started here and gone everywhere,” Dr. Myers said during a recent reunion between Myers and Bandy at OTC.

Wendell, the college’s first student body president and president of the Student Government Association when he attended OTC in the early 90s, stopped by the OTC campus in June to meet up with Dr. Myers, OTC Richwood Valley Campus President Jeff Jochems and Dean of Students Karla Gregg to talk over old times.

Wendell, who was 34 when he attended the college, was a business and finance student. At the time, classes were held at the then-North Town Mall at Kearney Street and Glenstone Avenue, along with Lincoln Hall. The current campus had not been built.

Wendell was last on campus in 2006 for Dr. Myers’ retirement party. Their most-recent get together was organized when Wendell found himself going to a business seminar in Columbia, Mo. The gathering was marked with recollections from everyone about Wendell’s push to have the rhinoceros adopted as the college’s mascot.

“I was a Minnesota Vikings football fan and their symbol is a Viking wearing a helmet with a horn on it. It hit me. I had an epiphany – the rhinoceros. A lot of businesses use the rhinoceros as a symbol,” he said.

He promoted his animal of choice on campus during student elections. Wendell had green baseball hats made with a rhinoceros and the letters OTC on the front of them. He used the rhinoceros as his symbol for his election. He actually walked into a Board of Trustees meeting and handed the hats out to board members

The Springfield News-Leader even wrote an editorial endorsing the rhinoceros idea and ran a picture of Wendell holding a stuffed rhino.

“If the rhinoceros ever needs a press agent, Wendell Bandy is handy,” the editorial read.

But when the vote was taken for the official mascot, the rhinoceros narrowly lost to the eagle.

Wendell, who lives in White Sands, N.M., says that after OTC he went on to attend Upper Iowa Valley University where his earned a bachelor’s degree in human services.

He worked as a Licensed Practical Nurse at the Federal Medical Center in Springfield while attending OTC and served in the Air Force. Bandy spent 40 years in the US military service, including time in the Marine Corps, Air Force and Army. He is now retired from military service.

Dr. Myers said that when he was told recently that a man called the college looking for the former president and that the call had something to do with a rhino, Dr. Myers knew immediately who it was. “It’s Wendell Bandy,” Dr. Myers said. “He’s the rhino guy. He always was a bundle of energy.”

Bandy’s legacy at OTC will always be as the “rhino guy,” but he says his legacy is more about taking what he learned at the college and applying his education to real-life situations. He has his sights set on opening a financial business.

That’s when Dr. Myers added that the former student really did “start here and go everywhere.”