Governors Award for Excellence in Teaching

Three instructors from Ozarks Technical Community College received the Governor’s Award for Excellence in Teaching from the Missouri Community College Association. Tristin Hooker, Angie McChesney and Trisha White accepted the award at a ceremony in Holts Summit on Wednesday, April 8. The Excellence in Teaching award, presented annually by MCCA, is given to the top community college instructors in the state. The award includes a proclamation from Missouri Governor Jay Nixon. 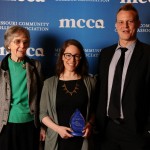 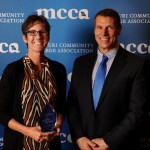 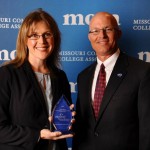 Cathy Myers: She is studying social work with plans to eventually earn a master’s degree in the same field. Myers is the recipient of the Phi Theta Kappa and the MCCA Leadership Award.

Elke Quinn: A graphic design major, Quinn plans to pursue a bachelor’s of fine arts in comic book art. She joined Phi Theta Kappa in the spring of 2013, and in 2014 was selected to be vice president of promotions for the Alpha Psi Tau chapter at OTC.

Amanda Reynolds: After receiving her associate degree in middle school education, Reynolds plans to transfer to Missouri State University to obtain a bachelor’s degree in the same field. She plans to add a reading specialist certification to her credentials as well.

Scott Murphy: He is studying secondary education with plans to eventually become a secondary history teacher. Murphy is a member of Phi Theta Kappa and a student ambassador.

Each student received a scholarship made possible through MOHELA, the state’s not-for-profit secondary market lender and servicer in the student loan industry.

Photos of the honorees receiving their awards will be posted to the Missouri Community College Association’s Facebook page.

OTC and SPS partner on student success at Hillcrest
September 22, 2021