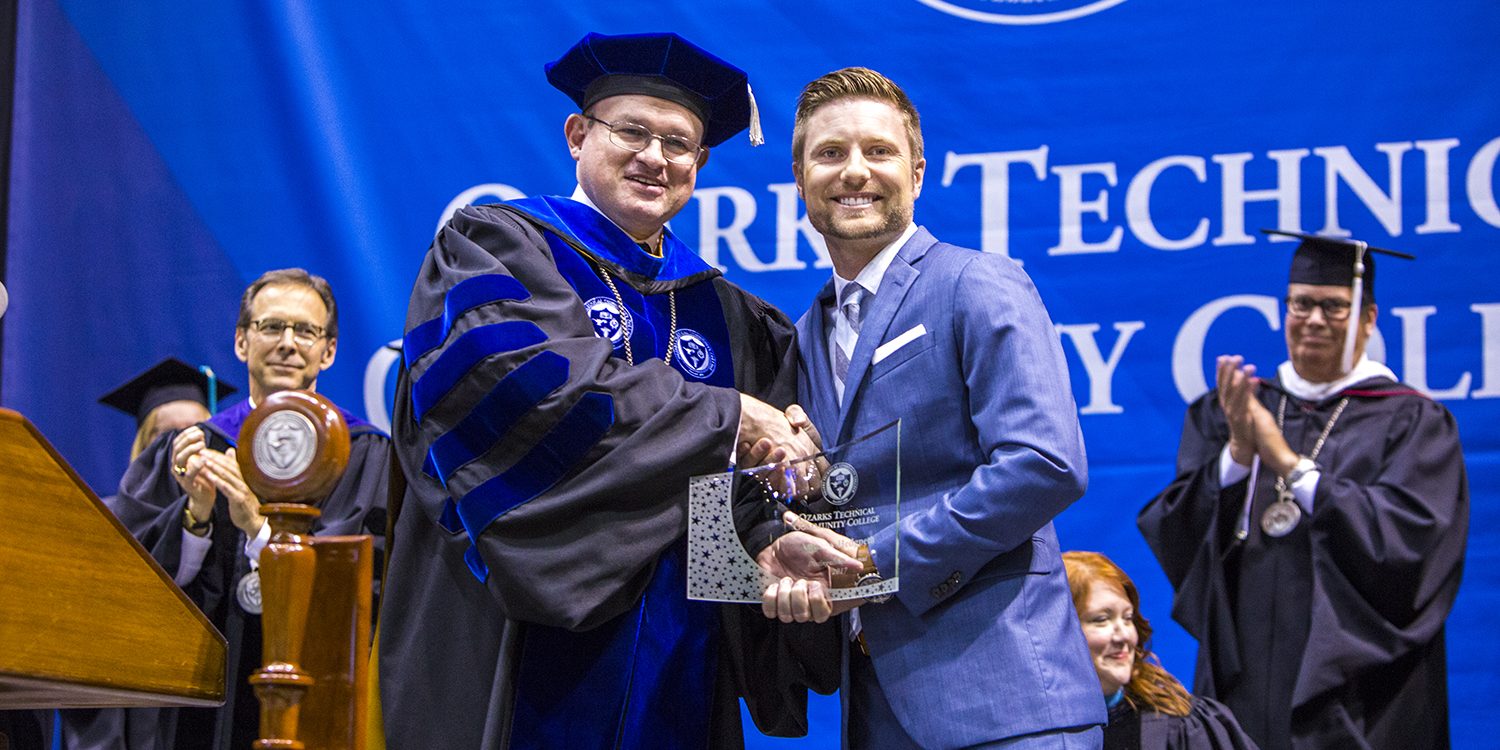 Andrew Hedgpeth, vice president of human resources at CoxHealth, received OTC’s Distinguished Alumnus of the Year award at the college’s 2017 commencement, held May 18 at JQH Arena.

“Andrew’s professional accomplishments serve as a testament to the college’s mission,” said OTC Chancellor Hal Higdon. “When we, as a community, invest in our students through educational opportunities, we see these students invest those learned skills and talents back into our community.”

Andrew, an inaugural recipient of the A+ Scholarship program, credited much of his success to the education he received at OTC.

“OTC and the A+ Scholarship were a way out of poverty for me,” he said. “I am living proof that when individuals and institutions invest in someone, doors can open for that individual in ways never before imagined.”

Andrew, a native of southwest Missouri, currently serves as vice president of human resources for CoxHealth. He obtained his Associate of Arts from OTC before graduating from Missouri State University in 2005 with a bachelor’s degree in psychology and a minor in human resources management. Andrew also holds a master’s degree in business administration with a healthcare management emphasis from Missouri State.

Andrew started his career as a human resources intern with Mercy Hospital Springfield in 2005. He joined CoxHealth in June 2008 as the compliance coordinator in Human Resources. He accepted the role of benefits manager at CoxHealth in the spring of 2009. In his current role as vice president of human resources, Andrew serves as an active member of the CoxHealth executive leadership team where he provides strategy, planning and implementation of human resources programs to meet the strategic business goals for CoxHealth’s 11,000 employees and 600 physicians.

Andrew’s professional achievements include the integration of CoxHealth’s wellness program with its employee health plan, cafeterias and fitness centers; the increased employer match on a 403(b) retirement plan; and the launch of CoxHealth’s 1906 Employee Store. Andrew also played a major role in the integration of Cox Medical Center Branson, Springfield Neurological Institute and Cox Medical Group.

Andrew maintains active leadership roles in several community organizations including the Ozark Board of Education, the Harmony House Domestic Violence Shelter Board, the City Utilities Community Credit Union Board, the Missouri State University Alumni Association Advisory Board, and the Society for Human Resources Management. He has also served on the Volunteer Hospital Association Mid-America Benefits Advisory Board and the Missouri Chamber of Commerce Industrial Relations Advisory Board. He spent two years as a Missouri Quality Award examiner, and he participates in several committees for CoxHealth.

Andrew enjoys spending his free time with his wife, Amanda, and their three children, Ella, Reid and Sophie. The family resides in Ozark, Mo.

About the Distinguished Alumni Award

The annual Distinguished Alumni Award is formally presented by the chancellor each year at OTC’s commencement. The award honors outstanding alumni for their exemplary career accomplishments and service to the community. Upon recommendation from a nomination committee, top candidates are presented to the chancellor for final consideration.

Past recipients of the Distinguished Alumni Award include Chef Jennifer Smith in 2016; Representative Elijah Haahr in 2015; Special Agent Sgt. Joseph M. Peters in 2014; Representative Diane Franklin in 2013; Rick Hughlett in 2012; Ryan Nicholls in 2011, and Paul Sundy in 2010.