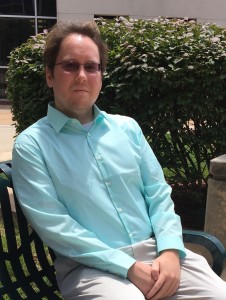 OTC has student ambassadors who show prospective students around the college’s various campuses and centers.

But Jay Rauhoff has become the type of OTC ambassador who spreads the word about the college around the world.

Rauhoff, who attended OTC from 2007-2009, is now in Finland where he will work for four years on his doctorate in teaching the English language to those who don’t speak it.

He received his master’s from Missouri State University in 2013. Once he receives his terminal degree, there are no limits to where he can go next.

“I plan to come home every now and then after I receive my doctorate but in my line of work, my opportunities are very open to the world. My job is in high demand,” said Rauhoff, who graduated Glendale High School and also was a student teacher at Hillcrest.

When Rauhoff attended OTC, he was planning to study physics. He liked the science, but then, after taking some language classes, he decided his path was in the arts.

“We had really good instructors in physics and I had a good time with the courses,” he said. “The other arts courses, however, fit me a lot better; although I still enjoy physics.”

It’s an appropriate choice for Rauhoff because using language and English runs in the family. He is the grandson of long-time News-leader sports columnist Marty Eddlemon.

“I’m always fascinated to learn about grandpa and how he worked and approached his work,” the 27-year-old Rauhoff said.

Rauhoff will attend the Univerisity of Truku in the city that bears the same name. He has been to Finland before and lived there for a number of years. The last time was in 2009.

“It’s a lovely country. I don’t’ know where to start in describing it. It’s widely known for its mixing of nature and technology,” he said.

Rauhoff liked the idea of being an overseas OTC ambassador. He remembers his time here with fondness.

“I had a fantastic time at OTC. I enjoyed the campus. The faculty blew me away,” he said.