OTC grad on the path to ‘American Ninja Warrior’ 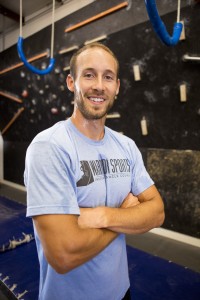 Adam Arnold is preparing for his TV appearance on ‘American Ninja Warrior.’

Ozarks Technical Community College may not have any athletic programs, but that doesn’t mean there aren’t any athletes walking the halls.

Arnold, who holds degrees in manufacturing, construction and industrial management technology from OTC, is scheduled to appear in the Orlando, Fla., regional qualifier of “American Ninja Warrior.” The program airs tonight on KYTV at 7 p.m.

The competition pits athletes against a grueling obstacle course. Contestants try to post the best time of any of the other competitors.

If the 26-year-old Hillcrest High School graduate does well, he can eventually qualify for the national championship held in Las Vegas and have a shot at a $1 million grand prize.

The road to Orlando has been a long two-year struggle. Arnold failed to be picked the last time he tried out in the Kansas City competition. However, he was picked to compete in Orlando this spring and did well enough to qualify for tonight’s contest.

“I’ve watched the show for a long time and thought that I could do it,” said Arnold, who played baseball and football at Hillcrest and Lincoln, Ill., Community College.

He built some of his own obstacles at home and then started training six days a week at the indoor Warrior Sports training complex in south Springfield that features many of the same obstacles that Arnold will face in Orlando.

While Arnold is very physically fit, having lost 30 pounds since his college days, he said it takes more than strength to compete as a warrior.

“Every bit of it requires mental strength over physical strength. You need the perfect mentality to get through it,” he said.

His diet to stay fit is simple: very little red meat, lots of fruits and vegetables, fish and absolutely no fast food. He eats every four hours, but doesn’t track his caloric intake.

He said he was grateful to everyone at OTC who helped him juggle his schedule so he could stand in line for days in Orlando in hopes of being selected for the show.

Dwight Chism, his IMT instructor at OTC, “was a big fan,” Arnold said.

“We talked about the competition,” Arnold said. “He was more than happy to help me. It’s because of him I was able to go.”