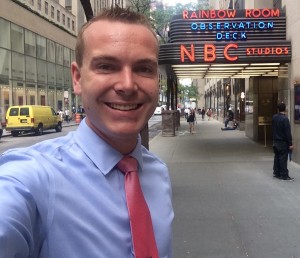 Sean Barnhill dreams big. The 22-year-old knew early on what he wanted in life and what his singular goal was — to work at NBC.

Now, after studying at OTC and moving on to Drury University, Sean is seeing his dreams come true. He is serving his second internship with NBC, this time on the staff of the TODAY Show.

“I knew what I wanted in life and my sole goal was to get there,” said Sean, a Branson High School graduate.

“Anything is possible if you believe in yourself. I’ve been tested many times. It just takes the right mindset and attitude to conquer life’s obstacles. You can’t listen to the naysayers. You have to stay true to yourself and hold out hope.”

After serving an internship at CNBC for three months last year, Sean began his internship with the TODAY Show in August and will be in New York until mid-December.

A senior at Drury, Sean is a communications major who is taking his courses online. He was an A+ student at OTC, which paid his tuition and fees, something he is grateful to have used in his education.

“A+ helped tremendously. Thanks to A+ and not incurring college debt at OTC, it allowed me to come to Drury without debt,” he said. “I remember the instructors at OTC were extremely helpful.”

Sean worked at KYTV twice, and when he found the NBC internship application online, he asked his bosses at KYTV to write him a recommendation, which they did.

He was at CNBC for three months on the assignment desk.

“I helped editors write stories and pitch stories. I also went out on shoots with correspondents. I went to New York University to see (Attorney General) Eric Holder who was holding an event,” he said.

“My first assignment was to be in the green room where all the celebrities hang out before going on the air. You greet them. There’s food. You order cars and limos for them,” Sean said, adding that he was in the green room when Justin Bieber and Brad Paisley were on the show.

“It’s extremely hard not to act like a fan when you’re in the presence of so many celebrities. You eventually become used to it.”

Now, Sean pitches story ideas to staff, attends editorial meetings and has the opportunity to write stories for Today.com.

There are nine interns who work at the TODAY Show. They work various shifts that start as early as 5:30 a.m. Sean said his work at KYTV helped prepare him for the early hours.

“Being at the network is as different as night and day from a local news setting,” he said. “You learn so much from being around people like Kathie Lee (Gifford) and Hoda (Kotb). They are the best in the industry. The people are really nice.”

When Sean is asked about his amazing ability to snag top-notch internships, he tells them its all about his ability to dream big and work hard.

“Many people ask how I obtained such a prestigious internship at the world’s leading news organization, not only once but twice.  My usual response is: ‘I’m a habitual dreamer,’” he said.

“Nothing has ever halted me from pursuing what I want in life. If you dream it, you can certainly do it. All it takes is a little elbow grease and perseverance.”