Former OTC student headed to university for the deaf 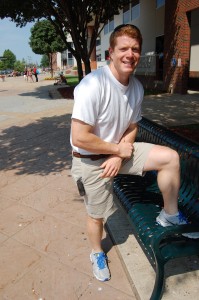 Doug Williams will be working on his master’s degree in deaf education at Gallaudet University, the world’s only university for the deaf, located in Washington, D.C.

Doug Williams came to OTC in search of a language class and left with a new career.

Williams, who has an undergraduate degree in English, is now working on his master’s degree in deaf education at Gallaudet University, the world’s only university for the deaf, located in Washington, D.C.

While Williams is not deaf, the classes he attends will not have a speaking instructor.

“I’ve never been in that environment. All of the classes are signed,” he said.

The training he received in American Sign Language classes he took at OTC allowed him to pass the rigorous fluency examinations required in order to be admitted as a hearing student to Gallaudet.

“I came to OTC looking for a second language to study. I was required to study two languages. After two semesters of Spanish, I took up sign language and fell in love with it,” the Virginia native said.

”I knew that I wanted to do something with it for the deaf community. I never would have guessed when I took the classes that I would be doing this.”

In addition to taking the sign language courses at OTC, Williams also was an ASL tutor at OTC last year.

“Now that he has found his passion, he has been looking toward the future,” said Steven Fritts, OTC’s American Sign Language instructor. “This is an incredible opportunity for Doug as Gallaudet is highly selective in admissions for hearing people.  They can only attend as grad students with rigorous standards. I am incredibly proud of him.”

Williams describes ASL as beautiful because of the expressiveness of the language.

“All other languages are spoken. With this one, the users show it through body movements and facial expression to get their point across,” he said.

Williams is excited about having an opportunity to attend Gallaudet and is grateful that he came to OTC and discovered his passion.

“How many people who are hearing get this opportunity? I love the language,” he said. “I’m excited to expand my knowledge and eventually be able to teach deaf students the American Sign Language.”

He said sign language is second nature to him, and Fritts urged him to apply for the master’s program at Gallaudet.