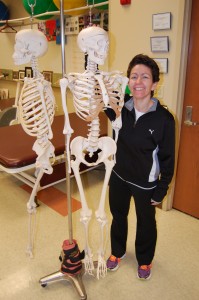 After working for 25 years as a fitness director on a cruise ship, Janice Zerbe was ready to stand on some dry land for a while.

Janice didn’t get that far from the water, choosing some dry land near the lakes in Branson, where she is studying at OTC Table Rock to become a physical therapy assistant.

“I’ve wanted to do this my whole life. Table Rock was close to home so I enrolled,” she said.

Originally from England, Janice came to the U.S. in 2000 and worked on cruise ships where she met her husband, Brian, who was a musician. He now plays with several shows in Branson.

Zerbe splits her time between the Table Rock Campus (where she did her prerequisite work) and the Richwood Valley Campus where the majority of the physical therapy courses are offered.

“I drive up from Branson every day to attend classes at Richwood Valley,” she said. “OTC is the place to be. I like everyone. They have your best interest at heart. If I needed anything, they helped me.”

Zerbe had some college training about 30 years ago. Instructors at the time suggested the physical therapy path would be good for here.

“I put it on the back burner. I didn’t know if it was something I wanted to do,” she said.

When she enrolled at Table Rock, she found the going a little tough because she’d been out of school for so long, but she’s making it work.

“The instructors were really helpful. I’m taking it one semester at a time. I’m a non-traditional student but everyone has been so helpful,” the 49-year-old said.

Zerbe found the return to college life “a breath of fresh air after being out 30 years.”

“Here I felt there wasn’t anybody I couldn’t go to for help. Anything I needed they would help you with. They said I could do this and every instructor was very positive,” she said.