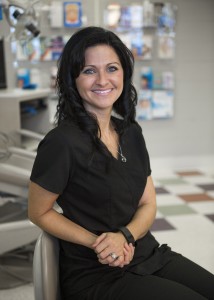 Kristi Christian will have plenty to be thankful when her family gathers next week for Thanksgiving – three beautiful children, a wonderful husband and a job that she enjoys.

Although Kristi’s mother, Lucille, died several years ago, she knows her mom will be at the dinner table with her and the family, too, because when her  when her mother was alive, Lucille wasand at Kristi’s side as she went through a life-changing journey.

To say that Kristi is a graduate of OTC’s dental hygiene program doesn’t do her story justice.

The Springfield woman is a perfect example of the perseverance and grit OTC students exhibit as they face and overcome countless obstacles to reach graduation and the lucrative and fulfilling jobs that come with OTC degrees.

Before she began attending OTC, Kristi’s support group was mainly her mother, Lucille.

“My mom was my biggest advocate. She was living across street. She stayed with the kids at night when I was working. I couldn’t have done it without her,” Kristi said, who was divorced with three young children before coming to OTC.

“I don’t know how I did it,” she said looking back on those days.

It was during this time that Kristi realized her current schedule was not sustainable and she had to do something else with her life. The answer came to her one night while watching television.

“A commercial came on for OTC and it was scrolling all these programs offered at the college. Suddenly, dental hygiene came up and I sat up and said, ‘Is that right? That’s something I could go back to school for and not keep working at Walmart overnights.’ I was ecstatic,” she said.

Kristi had tried to get into a Tulsa dental hygiene program years before, but it didn’t work out. After seeing the commercial, she came to OTC to get some more information, and she walked out of OTC registered for classes.

Kristi, with the help of her mom, juggled all of the responsibilities she had as a student-parent: attending class, studying, working and taking care of the kids.

“Mom was there for everything. She would help me clean the offices. She was watching my kids,” Kristi said.

Kristi would take her kids to school in the morning, then head to OTC to take her classes. She only slept three hours a day, usually from 6-9 at night, and sometimes, during a break in her classes, she would take a nap, but first she’d call her mom and ask her to call her to wake her up so she wouldn’t miss her next class.

But that all changed in 2011 when Lucille was diagnosed with a form of lung cancer.

“I was numb. How was I going to continue going to school? She was my strongest supporter. It was tough,” Kristi said.

“I was thankful her struggle had ended, but I knew a different journey for my kids and me was ahead,” Kristi said.

“I had to keep going. I had to finish. I was so close. The instructors, classmates, everyone was so encouraging. People dropped off food for us. I couldn’t have done it without them,” she said.

“Every single one of them were like family to me. I lost my mom, but I gained a whole bunch of other people.”

And when she received her degree in May 2012, she knew who would be watching her.

“I walked across that stage and I just looked up and I said, ‘We did it mom. We did it.’ I got through it,” she said.

Since graduation, Kristi has gone to work for Dr. Marshall Snodgrass at Our Dental Home in Marshfield. She’s also recently re-married.

Life is a lot different than it was eight years ago.

“There were difficult times. Everybody goes through struggles,” she said. “It’s how you deal with it and how you think about it that’s going to make a difference and make you a strong person in the end.”

Kristi has these words of inspiration to other students: “It can be done. If you put your heart and soul into it, it can be done.”

Now, one of Kristi’s daughters is taking classes at OTC, too.